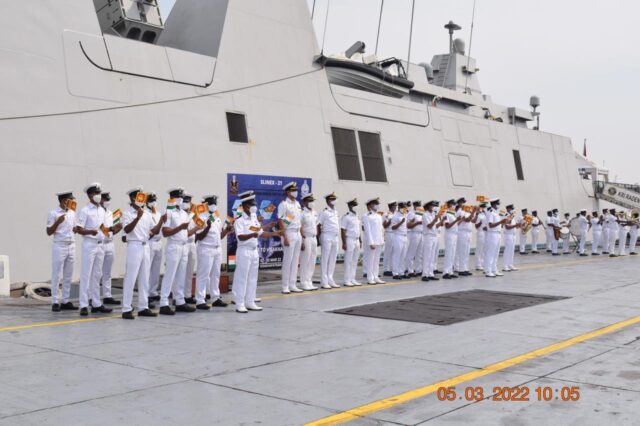 India and Sri Lanka began bilateral maritime exercise SLINEX yesterday. The ninth edition of the naval exercise began in Vishakhapatnam. The drill will enable the navies of the neighbours to improve mutual understanding and interoperability in the strategic Indian Ocean region.

While INS Kirch is participating from India in this drill, from the Sri Lankan navy, SLNS Sayurala, an advanced offshore patrol vessel is joining the exercise. INS Kirch is a guided missile corvette.

Other than better understanding interoperability, this exercise also aims to learn about best practices. The Navies can also learn about different procedures during multifaceted maritime operations. The first phase of the drill focuses on professional, social, cultural, and sporting exchanges. The second phase will include aviation operations including cross-deck flying, surface and anti-air weapon firing exercises, seamanship evolutions, advanced tactical maneuvers, and special forces operations at sea.

To collaborate between armed forces, the neighbours also held the ninth edition of the Army to Army Staff Talks (AAST). The talks were held last month in Pune. The purpose of these talks and the drills is to strengthen defence collaboration between the two countries.

Prior to this India concluded MILAN naval exercise, which is the largest multilateral naval exercise, hosted by India concluded on 4 March. As many as 40 countries had participated in the exercise. There were 26 ships, one submarine, and 21 aircraft in the drill hosted in Vishakhapatnam. The harbour phase was held from 25 to 28 February and the sea phase was held from 1 to 4 March.

Other than Sri Lanka (SLNS Sayurala), the navies of QUAD countries and Russia were also participants in this exercise, organized for the eleventh time.

The series of latest interactions highlight the priority of the Indian government’s “neighbors first” policy.