New Delhi: BrahMos, one of the world’s fastest anti-ship cruise missile, was today successfully test fired with an indigenous seeker at a Pokhran test range in Rajasthan.

Before, India used to buy seekers, a critical technology in missiles, from Russia.

“Formidable supersonic cruise missile BrahMos was successfully flight tested at 8:42 AM today at Pokhran test range, Rajasthan. The precision strike weapon with Indian-made seeker flew in its designated trajectory and hit the target with pin-point accuracy,” the Defence Ministry said on Twitter. 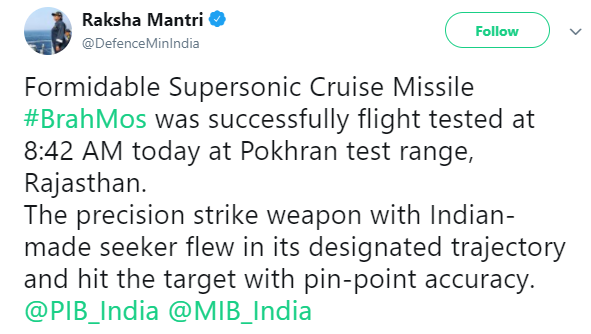 The seeker was developed by Research Centre Imarat (RCI), Hyderabad, in collaboration with other DRDO labs.

BrahMos is a joint venture with Russia and it holds 49.5 per cent of the equity. The missile is capable of being launched from land, sea, sub-sea and air against surface and sea-based targets.

Initially, its range was capped at 290 km as per obligations of the Missile Technology Control Regime (MTCR) but after India’s entry into the club in 2016, the range has been extended to 450 km and the plan is to increase it to 600km.

When India signed the inter-governmental agreement, it was agreed that the engine and the seekers will be developed by Russia. Because of this reason, India was using the seeker built by Russians. In 2016, BrahMos, DRDO and several other private companies in India initiated work on developing a seeker. Data-Patterns from Chennai, Alpha Design Technologies from Bangalore and ECIL participated in developing this indigenous seeker.

The seekers are used in the terminal, homing stage of the flight and it can be used in any kind of missiles.

India and Russia intend to make 2,000 BrahMos supersonic cruise missiles over the next ten years through their joint venture company, and nearly 50 percent of them are expected to be exported to friendly countries.