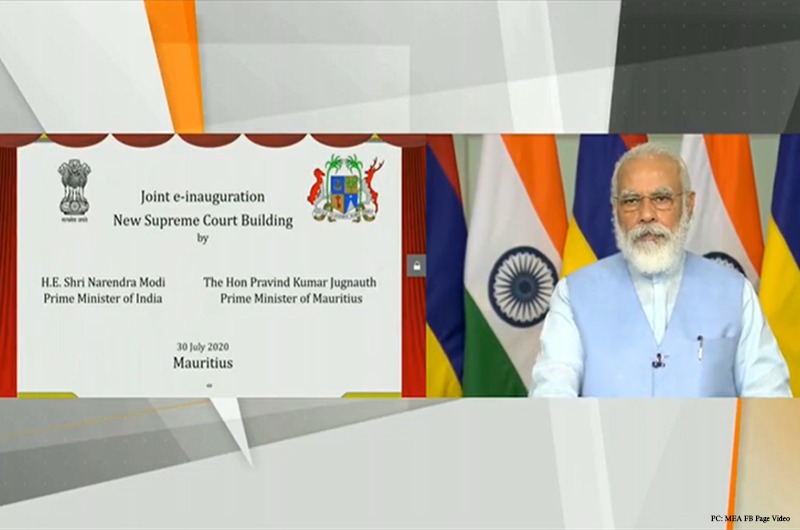 The new building was constructed with New Delhi’s support and is the first infrastructural project in Port Louis built with India’s assistance. It will unify all Supreme Court offices and divisions in Mauritius and bring them under one roof, hence, making the court more efficient.

The new Supreme Court building is a landmark achievement that symbolises strengthening of bilateral ties between Mauritius and India. The edifice also bears testament to the successful accomplishment of one of the five projects under the Special Economic Package of $353 mn that New Delhi has extended to Port Louis in 2016.

This inauguration is emblematic of India’s ability to execute projects of this nature with its neighbours as well as in different corners of the world. PM Modi, in his inaugural address said that India’s cooperation and support to its neighbours comes without any hidden motives and sans any vested political or commercial interests.

Furthermore the Ministry of External Affairs spokesperson Anurag Srivastava told the media that, “The new Supreme Court building provides state-of-the-art facilities. It is a fully green building. The project has been completed on schedule and at a cost below the initial estimates.” He emphasised that New Delhi’s futuristic partnerships rest on the strong foundation of diversity, concern, and respect for its associates, along with the vision for sustainable development.

He also stressed on the diverse developmental projects that India is associated with, stating that, “India’s development partnership footprint transcends the globe and includes successfully completed diverse projects like a major housing project in Sri Lanka, the Parliament building in Afghanistan, Mahatma Gandhi Convention Centre in Niger and improvement in health services through the emergency and trauma hospital in Nepal.” He further informed the media that the project was completed as per the scheduled time and at a cost lower than the early estimates.

Spread over an area of over 4700 square metres, the new Supreme Court building of Mauritius has more than 10 floors. It covers a total area of around 25,000 square metres. The building boasts of latest design and has green features and high energy efficiency, with special emphasis on thermal and sound insulation.

Lauding the success of the entire endeavour, the MEA said that the provedatial and timely culmination of this India-assiated project involving high quality architecture design in Mauritius would go a long way in creating more opportunities for Indian investments and collaboration in Mauritius and the Indian Ocean region.