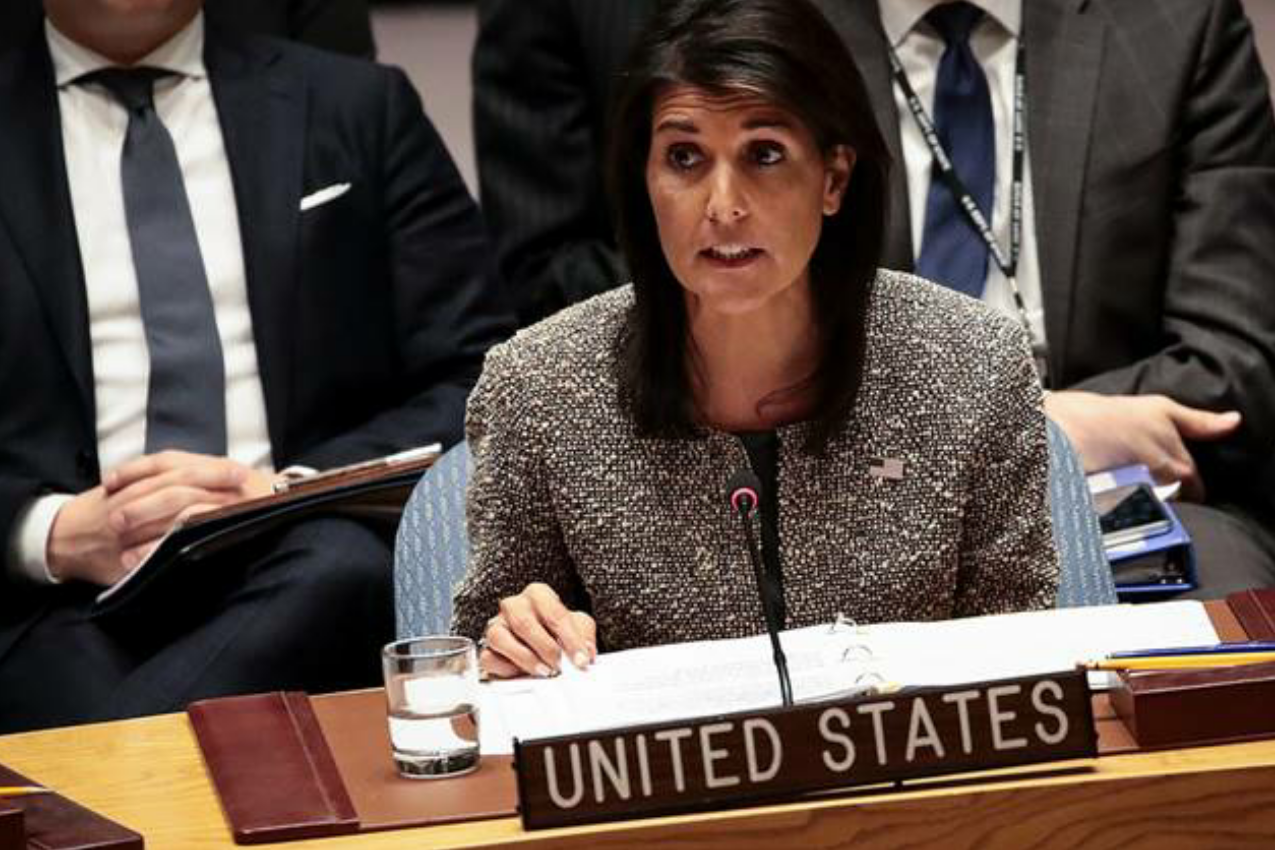 The United States on Tuesday pulls out of the United Nations’ Human Rights Council, with Ambassador Nikki Haley calling it “an organization that is not worthy of its name.” It was the latest withdrawal by the Trump administration from an international institution.

Haley, Trump’s envoy to the UN, said the US had given the human rights body “opportunity after opportunity” to make changes. She lambasted the council for “its chronic bias against Israel” and lamented the fact that its membership includes accused human rights abusers such as China, Cuba, Venezuela and the Democratic Republic of Congo.

“We take this step because our commitment does not allow us to remain a part of a hypocritical and self-serving organization that makes a mockery of human rights,” Haley said.

Secretary of State Mike Pompeo, appearing alongside Haley at the State Department, said there was no doubt that the council once had a “noble vision.”

But today we need to be honest,” Pompeo said. “The Human Rights Council is a poor defender of human rights.”

The announcement came just a day after the UN human rights chief, ZeidRa’ad al-Hussein, denounced the Trump administration for separating migrant children from their parents. But Haley cited longstanding US complaints that the 47-member council is biased against Israel. She had been threatening the pull-out since last year unless the council made changes advocated by the U.S.

“Regrettably, it is now clear that our call for reform was not heeded,” Haley said.

Still, she suggested the decision need not be permanent, adding that if the council did adopt reforms, “we would be happy to rejoin it.” She said the withdrawal notwithstanding, the US would continue to defend human rights at the United Nations.

Israeli Prime Minister Benjamin Netanyahu’s office called the US decision “courageous,” calling it “an unequivocal statement that enough is enough.”

The move extends a broader Trump administration pattern of stepping back from international agreements and forums under the president’s “America First” policy. Although numerous officials have said repeatedly that “America First does not mean America Alone,” the administration has retreated from multiple multilateral accords and consensuses since it took office.

Since January 2017, it has announced its withdrawal from the Paris climate accord, left the UN educational and cultural organization and pulled out of the Iran nuclear deal. Other contentious moves have included slapping tariffs on steel and aluminum against key trading partners, recognizing Jerusalem as Israel’s capital and moving the US Embassy there from Tel Aviv.

Opposition to the decision from human rights advocates was swift. A group of 12 organizations including Save the Children, Freedom House and the United Nations Association-USA said there were “legitimate concerns” about the council’s shortcomings but that none of them warranted a US exit.

“This decision is counterproductive to American national security and foreign policy interests and will make it more difficult to advance human rights priorities and aid victims of abuse around the world,” the organizations said in a joint statement.

Added Kenneth Roth, the executive director of Human Rights Watch: “All Trump seems to care about is defending Israel.”

Haley has been the driving force behind withdrawing from the human rights body, unprecedented in the 12-year history of the council. No country has ever dropped out voluntarily. Libya was kicked out seven years ago.

The move could reinforce the perception that the Trump administration is seeking to advance Israel’s agenda on the world stage, just as it prepares to unveil its long-awaited Israeli-Palestinian peace plan despite Palestinian outrage over the embassy relocation. Trump’s son-in-law and senior adviser, Jared Kushner, is visiting the Middle East this week as the White House works to lay the groundwork for unveiling the plan.

Israel is the only country in the world whose rights record comes up for discussion at every council session, under “Item 7” on the agenda. Item 7 on “Israel and the Occupied Palestinian Territories” has been part of the council’s regular business almost as long as it has existed.

The United States’ current term on the council ends next year. Although the U.S. could have remained a non-voting observer on the council, a US official said it was a “complete withdrawal” and that the United States was resigning its seat “effective immediately.” The official wasn’t authorized to comment publicly and insisted on anonymity.

That means the council will be left without one of its traditional defenders of human rights. In recent months, the United States has participated in attempts to pinpoint rights violations in places like South Sudan, Congo and Cambodia.

(With Inputs from AP)

US Plans Sanctions Relief for Venezuela to Favor The Transitional Government