In his films, Majid Majidi has touched on many themes and genres and has won numerous international awards. Through his films the Iranian cinema seems to have rediscovered humanism that Western art has forgotten.

Iran has been lauded as one of the best exporters of cinema. Some critics now rank Iran as the world’s most important national cinema, artistically, with a significance that invites comparison to Italian neorealism and similar movements in past decades. A range of international film festivals have honored Iranian cinema in the last twenty years. Among the crop of famous movie directors in Iran is Majid Majidi. Here is a sneak peek into his illustrious career.

Early Life
Majid Majidi was born on April 17, 1959 in Tehran, Iran to a middle class family. He started acting in amateur theater groups at the age of fourteen. After receiving his high school diploma, he started studying art at the Institute of Dramatic Art in Tehran. After the Islamic Revolution of 1979, his interest in cinema brought him to act in various films, notably Mohsen Makhmalbaf’s Boycott (1985) where he played a frustrated communist and Ali Azghar Shadaravan’s Teer baran (1986) where he played the role of real life character, Andarzgoo. Later, he started writing and directing short films.

Film Career
His feature film screenwriting and directing debut is marked by Baduk (1992), which was presented at the Quinzaine of Cannes and won awards at Tehran’s Fajr Film Festival. Since then, he has written and directed many noteworthy films that won worldwide recognitions, notably Children of Heaven (1997), winner of the Best Picture award at the Montreal International Film Festival and nominated for the Best Foreign Film at the Academy Awards, The Color of Paradise (1999), which also won the Best Picture award from Montreal International Film Festival and set a new record of box office for an Asian film, and Baran (2001), which won several major awards worldwide, notably the Best Picture award at the 25th Montreal World Film Festival and received nomination for the European Film Academy Award. In 2001, during the Afghanistan anti-Taliban war, he produced Barefoot to Herat (2003), an emotional documentary about Afghanistan’s refugee camps that won the Fipresci Award at Thessaloniki International Film Festival. Majjid Majid has also received the Douglas Sirk Award in 2001 and the Amici Vittorio de Sica Award in 2003.

In 2005, he directed The Willow Tree (2005) about a blind man who falls in love with someone other than his wife when he gets the chance to see again, which won four awards at the 2005 Fajr Film Festival in Tehran. He is one of Iran’s most influential directors and his films have a simple and poetic feel to them.

In 2008, Majidi’s acclaimed film The Song of Sparrows was the opening film of the Visakhapatnam International Film Festival in India. Majid Majidi was one of five international film directors invited by the Beijing government to create a documentary short film to introduce the city of Beijing, in preparationfor the 2008 Summer Olympics which was held in the Chinese capital; the project was titled “Vision Beijing”. Majidi pulled out of a Danish film festival in protest against the publication in Denmark of cartoons satirizing the Islamic prophet, Muhammad. Majidi stated that he was withdrawing “to protest against insulting any religious belief or icon”.

Majidi writes, “I believe in God and live with my beliefs in every single moment of my life. I would like to protest against insulting any religious belief and icon. For this reason, I would like to announce my withdrawal from your festival.”

Through his films the Iranian cinema seems to have rediscovered a humanism that Western art has forgotten. In a series of interviews titled “Thoughts on culture and Europe” Majidi stated, “Iran is an old country with a signifi cant cultural history. Our literature is very rich with poets such as Hafiz, Saadi, Rumi. In their writings, these poets have always given a great importance to the human being. Contemporary cultural subjects are stemming from this tradition as well as the rituals associated with them. The manner these subjects are dealt with is influenced by the particular beliefs of the Iranians that existed and continue to exist nowadays. These days, the world, and in particular the Western world, is in a period of disruption with the past. Human being and traditional moral values, dear to people, seem to have been lost in the process.”

On the popularity of Iranian films outside the country he said, “In my opinion, if one pays attention to the human being and to human values whether they are related to Iranian culture or another, one ends up being unaware of borders. There certainly exist differences among peoples in the area of the economy or of technology, but human values remain universal, because human beings were created equal by God. Indeed, the feelings, emotions and aspirations such as love, friendship, and heroism are present in all human beings. The language of Art can facilitate bringing people together; can develop people’s conscience of a common humanity, despite differences in races, cultures, or nationality. I think that the Iranian cinema has almost recovered this language and the world of today, thirsty for love and friendship seems to understand it without difficulties.” 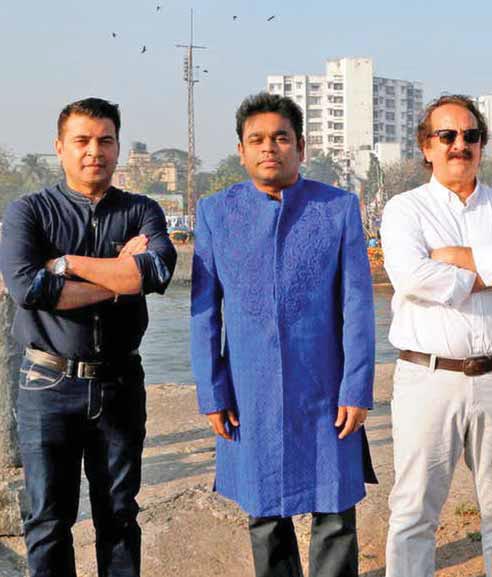 The director is in news for his recent film ‘Beyond the Clouds’ which was the opening film at International Film Festival of India (IFFI). The acclaimed filmmaker chose India as a setting to make a film, his first away from Iran. The film stars Ishaan Khatter, actor Shahid Kapoor’s younger brother and Malavika Mohanan in the lead roles.Malavika Mohanan is the daughter of cinematographer K. U. Mohanan and has modeled for several brands that include travel magazine and fashion brands. With music composed by A. R. Rahman and dialogues written by Vishal Bhardwaj, the film dwells on the adoration of love, life and nuanced human relationships. The first look was revealed on 10 February 2017 in Facebook by A. R. Rahman. The movie is made in three languages including Tamil.

Earlier, there was a buzz that actress Deepika Padukone had auditioned for the role, but things did not work out. Malavika, who is said to have been handpicked by Majidi himself, is a beauty in her own right. Speaking at a press conference at the ongoing International Film Festival of India (IFFI) in Goa Majidi said, “It is a great honour for me to be among the Indian artists and all the Indian big names here. I knew Indian cinema through Satyajit Ray, the famous Indian film director, and it was always my dream to make a film in India.”

“India has brilliant talent, but it has no chance to express itself because of the shadow of the industry,” he added. Talking about the film, he said: “There are many cultural similarities between Iran and India, and I was looking for a chance to make a film here, in India. So, after years it fortunately happened. It was a wonderful production team to work with; it was an all Indian crew, so it was a wonderful collaboration between the teams. The film was premiered at the London Film Festival, but for me the real premiere is tonight. I am so excited to see the film, with the Indian audience tonight here.” Majidi, who is also working on his second India-set project, added: “I believe I am more famous in India rather than my country.”