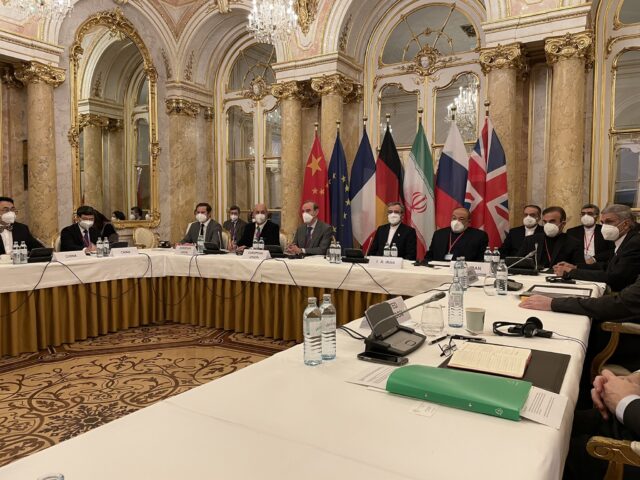 Talks to revive the 2015 Iran nuclear deal resumed on 29 November in Vienna. The dialogue process was stalled after the election Iranian President Ebrahim Raisi in June this year.

The EU official Enrique Mora, chairing the talks expressed hope that he felt “extremely positive,” and yet at the same cautioned that “difficult issues” have to be dealt with in the talks.

The Iran government had rejected the talks proposal until August this year, when President Raisi said they were ready to resume talks. It is reported that while the talks were paused, Iran went on to build its nuclear capabilities at a rapid pace.

The talks are hosted in the same hotel where the 2015 agreement was signed. The nuclear deal is also known as the Joint Comprehensive Plan of Action (JCPOA).

In the latest round of talks, diplomats from Russia, China, Britain, France and Germany are participating.

The US is participating in the talks indirectly. The US representative has expressed concern over recent developments in Iran and said that such actions do not “augur well” to revive the deal.

Iranian Foreign Ministry said the talks were held in a “professional and serious atmosphere,” while describing the Monday talks.

Ali Bagheri, who is leading the Iranian delegation said that the absolute priority for the talks is to lift sanctions against Iran.

In 2018, the then US president Donald Trump had pulled out of these talks and reimposed sanctions against Tehran.

Reports add that Iran has restarted enriching uranium in recent months and restricted access to its sites to weapon’s inspectors. Inspectors from the International Atomic Energy Agency (IAEA), the UN watchdog mandated with monitoring Iran’s nuclear facilities, had raised certain observations during their recent visit to Tehran.

According to IAEA Director General Rafael Grossi, there has been “no progress” on the issues raised earlier.

Apart from lifting of sanctions, Iran is also demanding a guarantee from the US that it will not quit the JCPOA. US officials have rejected any such guarantee.

While Iran observers believe that lifting economic sanctions can act as a breather for the battered economy, it may also be noted that Iran has been supplying oil to China illicitly. Iran, since 2020, has doubled its oil export and most of it is headed for China.

Experts argue that the US might tone down its demand in order to revive JCPOA and normalize ties with China.

Any deal between Washington and Teheran would require coordination with Russia and China.