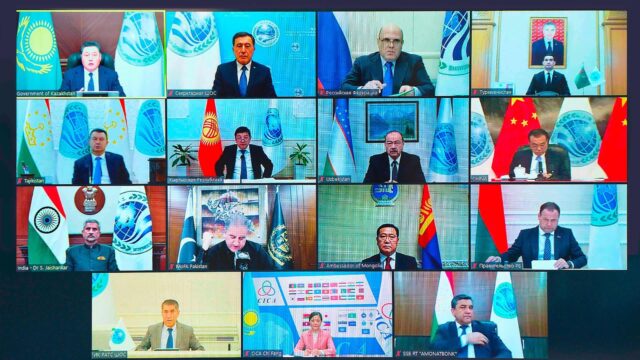 The Shanghai Cooperation Organization (SCO) was formed on 15th June 2001. It is a permanent intergovernmental international organisation. It is a political, economic and military organisation aiming to maintain peace, security and stability in the region. The SCO Charter was signed in 2002 and entered into force in 2003 and the official languages are Russian and Chinese.

The meeting was held on November 25, 2021, under the chairmanship of Kazakhstan. The meeting was held in Nur-Sultan in a virtual format. The SCO CHG meeting is being held annually and has the focus on the trade and economic agenda of the Organization and to approve its annual budget. The Meeting was attended by the Head of Governments of the SCO Member States, Observer States, Secretary-General of the SCO, Executive Director of the SCO Regional Anti-Terrorist Structure (RATS), Turkmenistan and other guests. External Affairs Minister (EAM) Dr S. Jaishankar attended the meeting and represented the Indian delegation.

During his address, EAM S. Jaishankar stated that India considers SCO as an important regional group to promote cooperation in various fields based on universally recognised international norms, good governance, rule of law, openness, transparency and equality”. He further stated, “Indian startups have so far created 65 unicorns, out of which 28 unicorns were added during 2021 alone. We stand ready to share our experience with the other SCO Member States through our initiative to set up a Special Working Group on Startups and Innovation.”

During the meeting, he put light on how the covid-19 has presented us with the challenges and also outlined India’s various initiatives to mitigate them. He also put focus on various issues like climate change and the need for reformed and invigorated multilateralism to reflect the current realities.