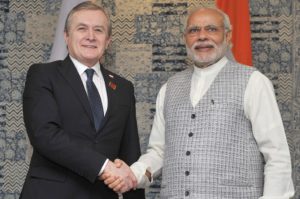 India-Poland relations are deep rooted and have traditionally been close, friendly and characterized by goodwill and cooperation. There are no major disagreements of a bilateral nature, and there has been cooperation between the two countries in the international fora.

Since the 15th century, a number of Polish writers, soldiers and missionaries th have visited India. During the 19thcentury, several Sanskrit classics were translated into Polish. A “History of Ancient India” in Polish was one of the first of its kind to be published in Europe in 1820. A Chair of Sanskrit was set up at the Jagiellonian th University of Krakow as far back as 1893. At the beginning of the 20 century, the Polish painter Norblin was commissioned by the Maharaja of Jodhpur to decorate the Umaid Bhavan Palace where his painting can still be seen. Feliks Topolski’s oil painting of Mahatma Gandhi’s assassination has adorned Rashtrapati Bhawan.

During World War II, the then Jam Sahib of Nawanagar had extended hospitality to some 6,000 Polish orphans released from Siberia. They had formed the World Association of Poles from India. Despite their advancing years, the members of the Association had donated funds for relief and rehabilitation after the Gujarat earthquake in January 2001.

India and Poland established diplomatic relations in 1954 and the Indian Embassy in Warsaw was opened in 1957. The two countries shared common ideological perceptions, based on their opposition to colonialism, imperialism and racism.

Estimated at approximately 4,000, the Indian community in Poland consists of traders (textiles, garments, electronics) who came after the collapse of communism, and professionals with multinational or Indian companies and software/IT experts. There are about 60 Indian restaurants in Poland, more than 30 in Warsaw alone. The number of Indian students in Poland has grown to over 1300. Several community organisations have come up and are supported by the Embassy.