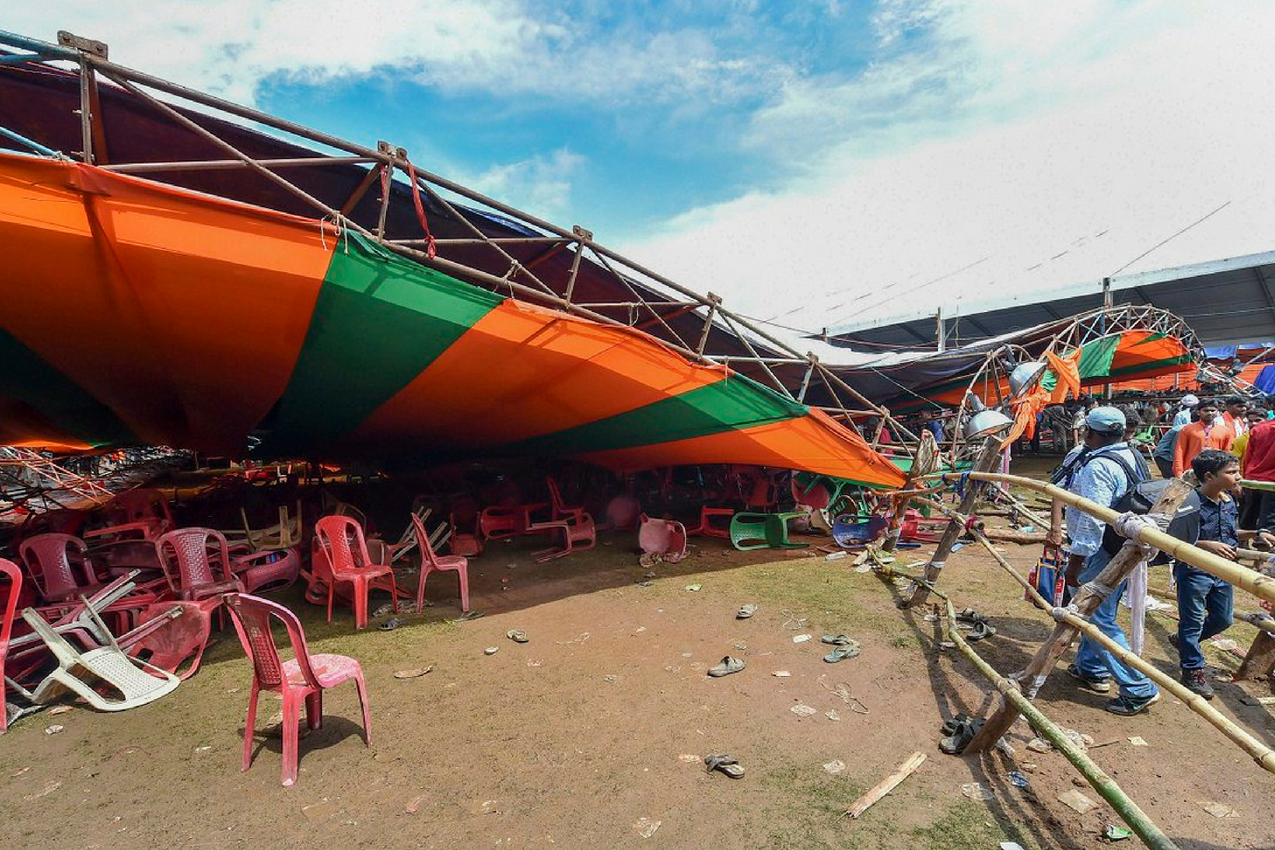 On Monday, Prime Minister Modi was in West Bengal’s Midnapore for a public rally, a part of his preparation for 2019’s general election.

Mid-speech there was commotion, as the rally hit a crisis. As many as 90 people were injured after a section of a tent caved in during PM Modi’s speech.

“Out of the 90 admitted to the hospital, 66 were males and 24 female. Of them, 14 were discharged after preliminary treatment. The condition of two is critical,” said Panchanan Kundu, the principal of Midnapore Medical College and Hospital.

The crowd of BJP leaders and Prime Minister himself on the dais were safe.  After the rally, PM Modi rushed to the hospital to check on the injured crowd who had been admitted to the Midnapore Medical College and Hospital.

“Fortunately, none of them has got severe injuries,” Samit Dash, president of West Midnapore district unit of the BJP, said.

The Center has sought a report from the West Bengal government over the incident, a home ministry spokesperson said.

Volunteers and locals at the venue said a part of the tent gave away after some people climbed on the iron rods holding up the canopy. Heavy rains too added to the collapse.

“The number of people swelled so much that several persons climbed the rods to get a view of the dais and the leaders triggering the collapse,” Atanu Das, a local who was close to the spot of the accident, said.

Dipak Mahato, an 18-year-old from Salboni, said he fell down after people started running following the structure’s collapse and injured his left hand.

“I was under the shed that caved in. Before I could escape an iron rod descended and hit my shoulder. My daughter-in-law who was accompanying me pulled me out. Otherwise, the injury would have been worse,” Swarna Mahato, who came to attend the rally, said.

Modi praised the audience for not leaving the rally despite rising chaos after the tent fell.

“Today, I witnessed a new force of the people of Bengal. Can anyone imagine that one-third of the pandal came down and yet the meeting continued peacefully? I cannot think it happening anywhere. I shall remember this meeting for the rest of my life,” Modi said. “There are so many people here despite heavy rains and obstructions. And now the meeting is continuing without a hitch despite the collapse,” he added.

West Bengal Chief Minister Mamata Banerjee said the state government would provide all medical assistance to those injured in the incident. “We pray for the speedy recovery of all those injured at the Midnapore rally today. The government is giving all help for medical treatment.”

The tent that collapsed had been erected next to the main entrance of the rally venue to shelter people from the rain, but was unable to hold against it.

When he saw the tent collapsing during his speech, PM Modi immediately instructed special protection group personnel standing near him to look after the people and attend to the injured