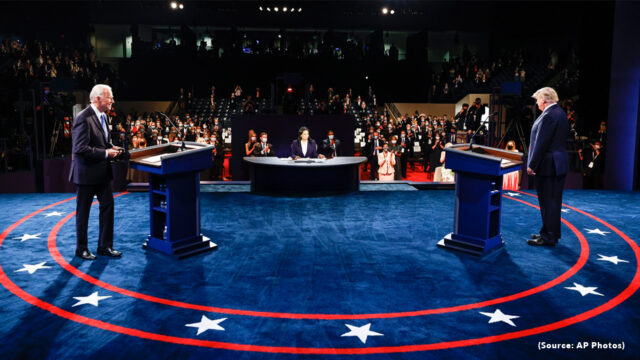 October 23, 2020: The second and last US presidential debate concluded in Nashville, Tennessee on October 22. The two presidential candidates debated a host of issues including Covid-19 and the pandemic economy, racism and police brutality, foreign policy, healthcare and climate change in a session moderated by Kristen Welker of NBC News.

The democratic presidential candidate Mr Joe Biden attacked the Trump administration for mishandling of the pandemic. He said, “We’re in a circumstance where the President thus far has no comprehensive plan. I would make sure we move in a direction where people wear masks, we have rapid testing, we have national standards on opening up schools and businesses. Folks, I will take care of this, I will end this, I will make sure we have a plan.” On the other hand, Mr Trump underplayed the pandemic and said that the vaccine might not be available by November 3. We’re rounding the turn, we’re rounding the corner,” Mr  Trump claimed.

On the topic of healthcare, Mr Trump indicated his administration had done an excellent job but did not divulge any further information on how his administration is planning to do so. Moreover, he attacked Mr Biden’s plans to re-enforce Obamacare. Mr Biden referred to healthcare not as a privilege, but a right.

While discussing a report of 545 missing children at the US Mexico border, Mr Biden indicated that such incidents are making the US a ‘laughing stock’. On the same issue, Mr Trump referred to the ‘cages’ built on the border, referring to the holding facilities on the US-Mexico border. Moreover, both candidates exchanged several allegations over the issue of racism in the US where Mr Trump called himself ‘least racist’ person.