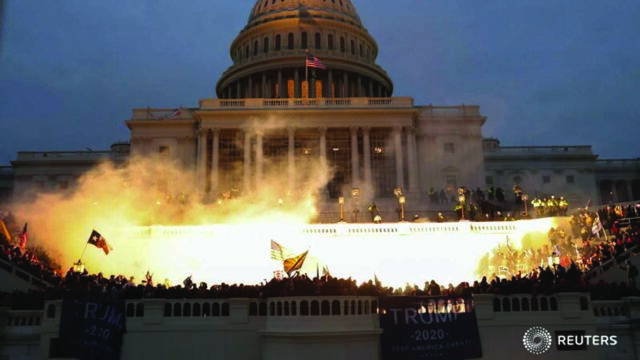 January 7, 2021: Thousands of Trump supporters on January 6 stormed the US Capitol Hill refusing to accept the defeat in 2020 US Presidential elections. The protestors clashed with law enforcement and stormed the Capitol Hill shortly after Mr Trump’s rally in Washington DC. Mr Donald Trump had claimed the 2020 Presidential election ‘stolen’. Four deaths have been reported so far as a result of riots.

The US Congress on January 6 had gathered for a ceremonial session of Congress in a rare joint session to begin considering the certification of Electoral College results and formally declare President-elect Joe Biden’s victory in the 2020 presidential election. However, the US Capitol had to be locked down with lawmakers inside after protesters tore down metal barricades at the bottom of the Capitol’s steps and were met by officers in riot gear. The police soon resorted to firing pepper spray into the crowd to keep them back, the crowds were heard shouting “traitors”.

After the chaos subsided, the US Congress gathered again and continued with the process to certify the election. In the early hours of Thursday morning in the US, votes for Mr Biden had passed the required 270-mark, confirming his victory.

President-elect Joe Biden denounced the storming of Capitol Hill and called it “an assault on the citadel of liberty.” He also called this “a dark moment” in the nation’s history.

The world leaders expressed their shock and concerns over the events that transpired in the US. Prime Minister of the UK Mr Boris Johnson called the events “disgraceful”.

“Disgraceful scenes in U.S. Congress. The United States stands for democracy around the world and it is now vital that there should be a peaceful and orderly transfer of power,” tweeted the UK PM.

Canadian Prime Minister Mr Justin Trudeau tweeted, “Canadians are deeply disturbed and saddened by the attack on democracy in the United States, our closest ally and neighbour. Violence will never succeed in overruling the will of the people. Democracy in the US must be upheld – and it will be.”

India’s Prime Minister Mr Narendra Modi expressed his concerns over the situation. “Distressed to see news about rioting and violence in Washington DC. Orderly and peaceful transfer of power must continue. The democratic process cannot be allowed to be subverted through unlawful protests,” tweeted PM Modi on January 7.

Former US President Mr Barack Obama issued a statement on January 7. His statement read, “History will rightly remember today’s violence at the Capitol, incited by a sitting president who has continued to baselessly lie about the outcome of a lawful election, as a moment of great dishonor and shame for our nation.”

He called upon the Republican lawmakers to make a clear choice. They can continue down this road and keep stoking the raging fires. Or they can choose reality and take the first steps toward extinguishing the flames,” he said in the statement.

The statement further read, “I’ve been heartened to see many members of the President’s party speak up forcefully today. Their voices add to the examples of Republican state and local election officials in states like Georgia who’ve refused to be intimidated and have discharged their duties honorably.”

The statement referred to many Republican leaders who condemned the riots and called for peace while accepting the results of 2020 Presidential elections.

Senator Lindsey Graham who was one of the most ardent supporters of Mr Trump said, “Trump and I, we had a hell of a journey. I hate it being this way. … all I can say is count me out. Enough is enough. I tried to be helpful.”  He further denounced the attack on Capitol Hill on Twitter saying, “I support peaceful protests but not violence and destruction. People need to leave the Capitol now! This is a national embarrassment. Those who made this attack on our government need to be identified and prosecuted to the fullest extent of the law. Their actions are repugnant to democracy.”

The Capitol Building is a meeting place of the US Congress much like parliament building in India. It houses the Senate (in the north wing) and the House of Representatives (in south wing). It has the offices of congressional leaders. The building is used for ceremonies of national importance such as presidential inaugurations. The building is a popular site among visitors and houses a museum of American art and history. The Capitol Hill has landmarks like the Supreme Court building, the Library of Congress, the Marine Barracks, the Washington Navy Yard, and Congressional Cemetery.