“We are beginning a new journey with commissioning of INS Kalvari. May sea gods keep you strong and safe,” said the PM.

The ship is named after tiger shark in Malayalam symbolizing agility, strength and predatory power.

As the PM dedicated it to the nation, he also spoke at length about India’s security, but also about stability in the region and India’s global responsibilities.

The submarine will play a crucial role in India’s security and indeed in stability for the region and the world at large, said the PM.

Congratulating the people of India on this occasion, the Prime Minister described INS Kalvari as a prime example of “Make in India.” He described the submarine as an excellent illustration of the fast growing strategic partnership between India and France. 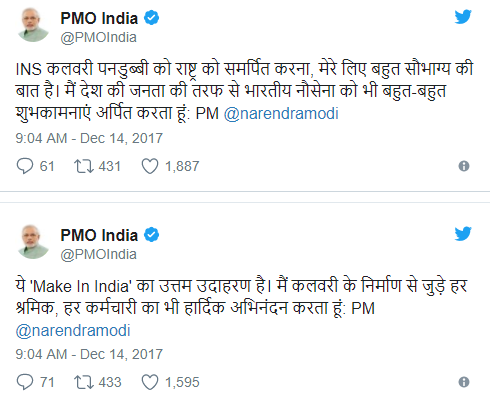 The Prime Minister said this vision can be understood through the acronym SAGAR – Security and Growth for All in the Region.

Kalvari, the first of the six Scorpene-class submarines, was handed over by shipbuilder Mazagon Dock Limited (MDL), and commissioned into the Navy by the PM in Mumbai.

The new 1,565-tonne submarine is to be followed by five Scorpene submarines under the Rs 23,652 crore “Project-75” underway at Mazagon Docks in collaboration with France.

First put to sea on May 1, 2016, Kalvari has since undergone a comprehensive trial schedule to validate her capability to float, move and fight.

The submarine has an overall length of 67.5 metre and a height of about 12.3 metres. The hull form, fin and hydroplanes are specifically designed to produce minimum underwater resistance.

Kalvari-class is capable of offensive operations across the entire spectrum of naval warfare.

It is equipped with WLT/Weapons Launching tubes and these can carry weapons on board which can effectively be reloaded at sea. It is also equipped with 6 x 533-mm torpedo tubes for 18 heavy weight wire guided Surface and Underwater Target (SUT) torpedoes or SM.39 Exocet Anti-ship missiles and 30 mines in place of torpedoes. The class is also fitted with mobile C303/S anti-torpedo decoys for self defence. The weapon systems and sensors are integrated with Submarine Tactical Integrated Combat System (SUBTICS). It has a sonar system is capable of Low Frequency Analysis and Ranging (LOFAR) enabling long rage detection and classification.

In 2005, India chose the Scorpène design and authorized a deal to purchase six submarines for US$3 billion ($500 million per boat) under Project 75 (P75). The project was necessitated by the dwindling number of submarines in the Indian Navy. Indian Navy needed replacement for the older Sindhughosh (Kilo) and Shishumar (U209) class of submarines.