Around four thousand Central Americans, mostly from Honduras, have been trekking across Mexico to the USA border, with hopes of seeking asylum in the United States.

Dubbed as a ‘caravan’ of migrants, they are still weeks and at least a thousand kilometers away from the nearest USA border. With a backpack with a few belongings and no amenities, and nature as their only shelter, they are fervently marching towards their only ray of hope. When asked, they say that they are fleeing poverty and violence back home. One Honduran migrant, Joel Eduardo Espinar, said that a child cannot even go outside to buy something as there is the perennial fear of death and bloodshed. Illegal migration is not the intent of these migrants, who wish to seek asylum. Their aspiration is to work hard to rebuild their lives from scratch. 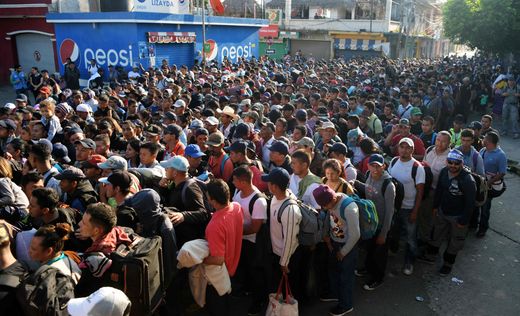 USA President Donald Trump and his supporters, calling this migration a ‘mass invasion’, have sparked fear-mongering and hysteria amongst the people by falsely accusing them of harbouring diseases such as ‘smallpox’, Hepatitis A, influenza, tuberculosis, shigellosis, syphilis, leprosy etc., and of threatening USA’s peace by potential crime. He has warned people that the migrants would be a parasitic entity, absorbing the available resources meant for US citizens. He has responded by sending around 5000 troops to the borders in order to check this apparent illegal migration, also authorizing them to throw rocks at the migrants, most of whom are families.

As per international asylum laws, if one cannot make it to a foreign country, the person has a right to seek asylum. That country is obligated by law to hear the case and evaluate the claim and provide temporary shelter. Refugees’ rights became enshrined in international law through global agreements signed in 1951 and again in 1967, after the end of World War II and European imperialism. Asylum law is also a part of USA’s domestic law and is thus administered by its domestic governments and courts. But since on the global level there is no such enforcing and overseeing authority, a country can break this pledge and deny asylum as well. In an increasingly polarising world, more and more countries are turning away asylum seekers, with the European Union, Australia, Peru, and Ecuador is the most recent offenders of this international law.