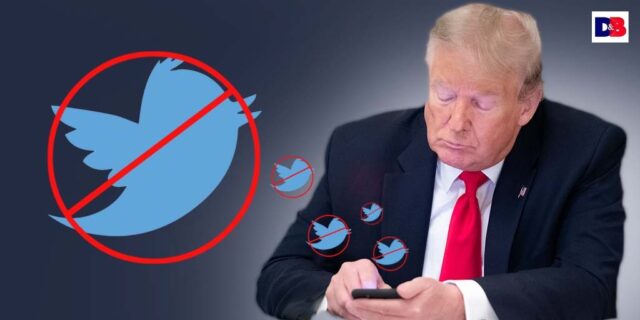 “After close review of recent Tweets from the @realDonaldTrump account and the context around them we have permanently suspended the account due to the risk of further incitement of violence,” Twitter said on January 8.

After the January 6 riots on Capitol Hill, social media organisations including Twitter and Facebook and Facebook’s subsidiary Instagram had temporarily suspended Mr Trump’s accounts for spreading misinformation and inciting violence. Twitter had suspended his account for 12 hours and had warned about permanent suspension if the tweets continued to violate policies.

His account was reinstated briefly and had accepted the victory of Mr Joe Biden in the presidential election. However, he further posted a series of tweets stating that he will not attend the inauguration on January 20 and his supporters “will not be disrespected or treated unfairly in any way, shape or form!!!” This prompted the social media company to permanently suspend his account. The company stated that his tweets could be seen as “further indication that President Trump does not plan to facilitate an orderly transition.”

“In the context of horrific events this week, we made it clear on Wednesday that additional violations of the Twitter Rules would potentially result in this very course of action,” said Twitter.

The ban is on his account @realDonaldTrump and not on Trump himself.

This action is unprecedented since Mr Trump is still a sitting President of the US till the January 20 inauguration of President-elect Mr Joe Biden. This is the first time Twitter has banned a head of state.

Other accounts including that of the Trump Campaign were also suspended after it became clear that other accounts are being used to tweet the messages in language similar to what Mr Trump had used. Trump campaign’s account @TeamTrump has been suspended and the tweets from @POTUS and @WhiteHouse were deleted.

In a now deleted tweet from @POTUS account, Mr Trump has flouted the possibility of creating an alternate social media platform. He added, “We will not be SILENCED!”

“If it is clear that another account is being used for the purposes of evading a ban, it is also subject to suspension,” Twitter said in a statement.

Mr Donald Trump’s Twitter account had more than 88 million followers. He used the platform extensively during his tenure.