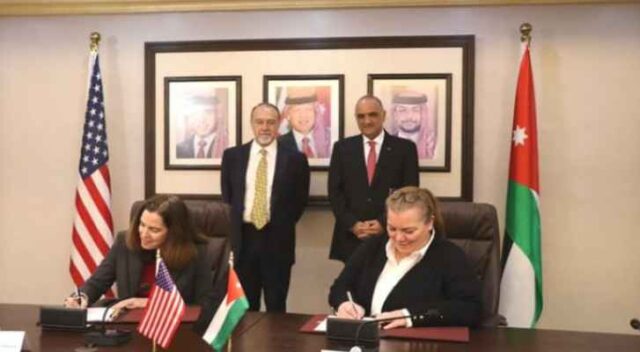 On November 27, 2022, the US and Jordan signed an annual US grant agreement worth $ 845.1 million to support the kingdom’s budget. Jordan’s Prime Minister, Bisher Al Khasawneh, presided over the ceremony. The USAID and the Ministry of Planning and International Cooperation signed the agreement at the Planning Ministry’s headquarters. The grant is a part of the US economic assistance program to Jordan and also falls under the third memorandum of understanding (MoU) for 2018–2022.

While speaking during the signing ceremony, PM Khasawneh particularly stressed the “deep-rooted and strategic” partnership between the two nations and also highlighted the importance that Jordan attaches to the advancement of its partnership with the US. The premier also expressed appreciation to Jordan for this support, which reflects its recognition of Washington of the magnitude of the challenges being faced by Jordan and its support for Amman’s comprehensive modernization project. He further noted that Jordan will continue to move forward with its comprehensive modernization project along with its three tracks of politics, economics, and administration. All of these fall under the framework of the political system modernization, the Economic Modernization Vision (EMV), and the public sector modernization roadmap, all under the leadership of His Majesty King Abdullah.

The agreement was signed by Zeina Toukan, the Minister of Planning and International Cooperation, and Acting USAID Mission Director Margaret Spears. According to Toukan, under the agreement, the US government will transfer the grant directly to the Treasury this month, and she also stressed the importance of this support in contributing to priority developmental projects in the education, financial, water, public works, and housing sectors. The minister further noted that the grant will also play a significant role in supporting the recovery of the economy, which will inevitably contribute towards reducing the general budget deficit while supporting the plans of the government, which aim to provide a conducive environment for the EMV.

The US Ambassador to Jordan, Henry T. Wooster, conveyed that the US will work with the government and people of the Kingdom to stimulate the recovery of the economy, provide proper education, healthcare, and jobs, and enhance water security. The Ambassador further said that the transfer of $845,1 million to the government of Jordan signifies the US’s continuing commitment to the partnership between the two countries, which spans over seven decades. He added that “Today marks the last agreement and transfer under the 2018 Memorandum of Understanding, which, when combined with the new MOU signed by our governments in September, equates to the largest U.S. economic assistance programme in the world.” Further, the Ambassador reaffirmed that the United States supports the vision for reforms of His Majesty King Abdullah that will help Jordan move towards a stronger future.

Margaret Spears said that joint achievements were built on solid relations between the two nations, as the ties are based on commitment, mutual respect, and follow-up. Furthermore, the United States and Jordan signed a seven-year memorandum of understanding in September this year for a total of $ 10.15 billion, and under this MoU, the United States will provide Jordan with $ 1.45 billion per year in bilateral foreign assistance beginning in the fiscal year 2023 and ending in the fiscal year 2029.