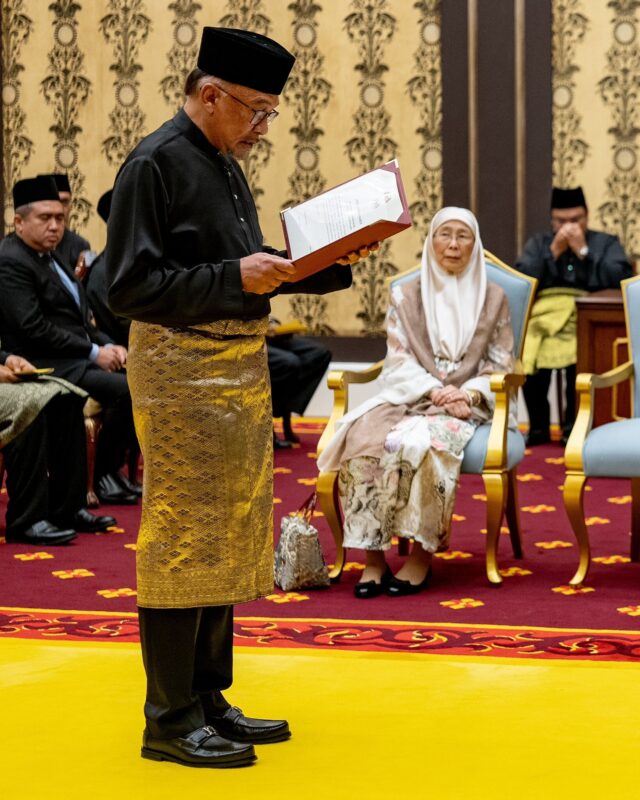 The King of Malaysia named on Thursday, November 24, 2022, the reformist opposition leader Anwar Ibrahim as the prime minister of the country, ending the days of uncertainty after the divisive general election produced a hung parliament. Anwar took his oath of office on Thursday evening in a simple ceremony held at the national palace. Malaysia’s king, Sultan Abdullah Sultan Ahmad Shah, named Anwar, aged 75, as the nation’s 10th leader and expressed his satisfaction that Anwar was the candidate who was likely to have majority support.

Anwar’s Alliance of Hope led Saturday’s election with 82 seats, and there was a shortage of the 112 seats needed for a majority. There was an unexpected surge of Malay support that propelled former Prime Minister Muhyiddin Yassin’s right-leaning National Alliance to win a total of 73 seats, along with its ally, the Pan-Malaysian Islamic Party, which emerged as the biggest single party with 49 seats. The stalemate was resolved after the long-ruling bloc led by the United Malays National Organization agreed to support a government of unity under Anwar. Such a collaboration was previously unthinkable in Malaysian politics, as long as the rivalry between the two parties reigned supreme. Various other influential groups on Borneo Island have said that they will follow the king’s decision.

After the inauguration, Anwar said he would shoulder the duties of the country entrusted to him with the utmost humility. Along with his team, he vowed to carry out his heavy responsibility, which is based on the aspirations of the people. The rise of Anwar to the top caps the roller-coaster political journey and will further ease the fears of greater Islamization. However, he faces a tall task in bridging the divides on racial grounds, which deepened after the poll on Saturday, as well as reviving the economy, which is struggling with rising inflation and a currency that has fallen to its weakest point.

A South-East Asian political expert, Bridget Welsh, said that Anwar is a globalist who will ensure international investors. He is considered a bridge builder across communities, which tests his leadership in moving forward while at the same time offering reassurance for handling obstacles and challenges that Malaysia will encounter. Anwar was a former deputy prime minister whose sacking and imprisonment in the 1990s culminated in massive street protests and the reform movement, which became a major force in politics.

Thursday marked his bloc of reformists’ second victory, while its first was the historic 2018 polls that led toward the first change in the regime since Malaysia’s independence from British rule in 1957.