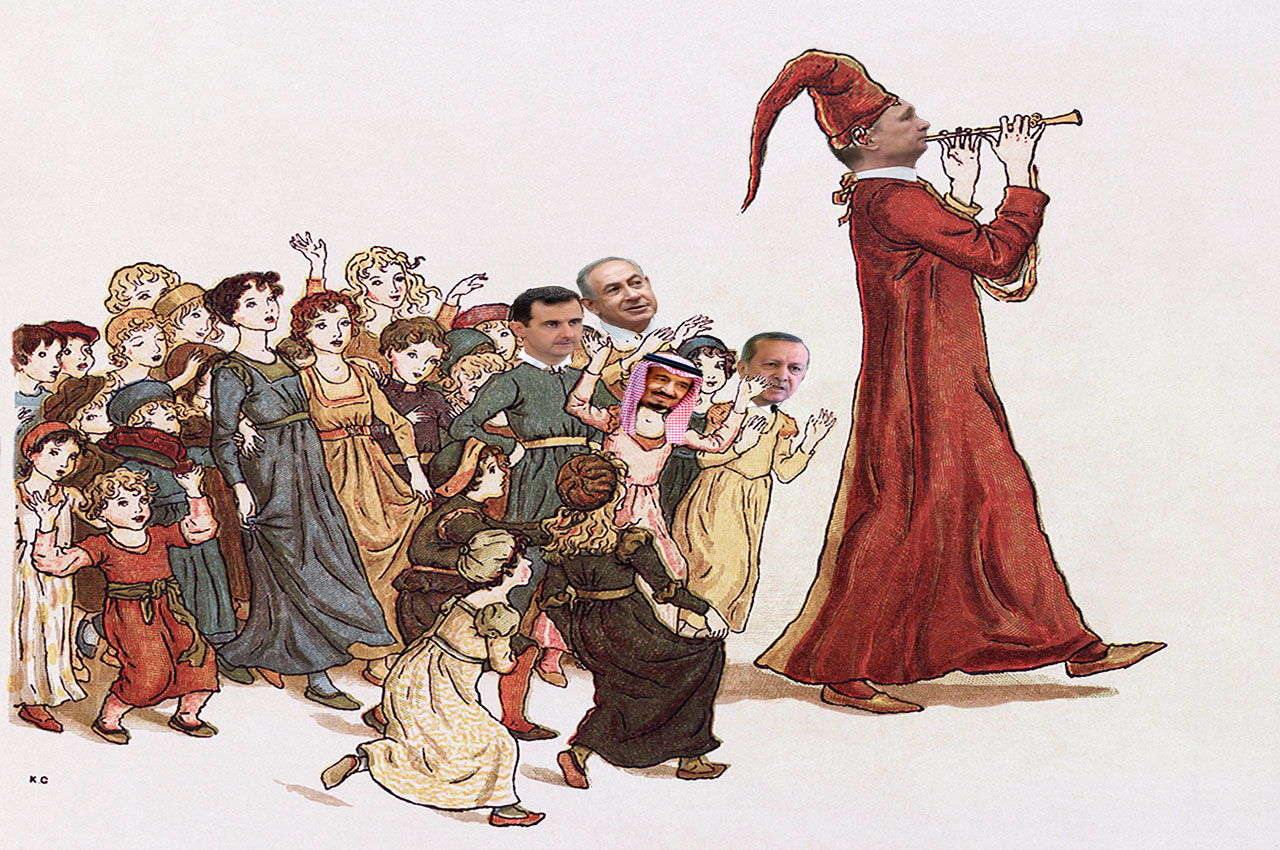 New Delhi: The U.S. influence in world politics is declining. From the Middle East to Asia, American allies are turning to Russian President Vladimir Putin to secure their interests and fix problems.

Russia recently rolled out a red carpet for King Salman of Saudi Arabia, with the monarch leading a high-profile and  significant delegation to Moscow. With this visit, King Salman became the first Saudi royal to visit Russia.

Last month, Putin and his Turkish counterpart Recep Tayyip Erdogan held talks in Ankara. The two-hour talk was primarily focused on the details of a peaceful settlement in Syria and the implementation of the Astana agreements. Both the sides also expressed their readiness to continue joint work on the zones of de-escalation in Syria.

Putin is undoubtedly the new master of the Middle East and has consistently questioned the role played by the United States and its allies in regional conflicts around the world.

Speaking at the annual Saint Petersburg International Economic Forum (SPIEF 2017), Putin said that Russia is not protecting Bashar al-Assad but the Syrian statehood.

“We are not defending so much President Assad as Syrian statehood. We do not want Syria to be confronted with a situation similar to that in Libya or Somalia or Afghanistan, where NATO has been present for many years but the situation is not changing for the better. We want to preserve the Syrian statehood and once this fundamental matter is resolved, to move further towards settling the Syrian crisis by political means.”

On world stage, Putin has always managed to outmaneuver his counterparts. Russia supported the recent sanctions against North Korea. However, Putin believes that smaller countries don’t have any other way to protect their independence, security and sovereignty but by acquiring nuclear weapons.

Big boy on the block

At present, Russia is a major and active player in the Middle East and holds the United States responsible for the chaos unfolding in the region. It has become a dependable partner in the region and has tipped the balance of power.

The American policy makers are preoccupied with Asia and the Middle Eastern leaders see Russia as a partner which is serious about the ongoing crisis in the region. The Israelis and Turks, the Egyptians and Jordanians are hoping that Kremlin can secure their interests and fix their problems.

Saudi Arabia and Russia are allies in the global oil market but they are on the opposite sides in the Syrian civil war. While Moscow is supporting the regime of President Bashar al-Assad, Riyadh is backing the opposition.

Yemen is another potential point of disagreement between Riyadh and Moscow as the Saudi-led coalition has been bombing Houthi rebels since 2015, drawing sharp criticism from Moscow.

The Saudis and other Gulf powers are wary of Iran’s role in Syria and want Russia to reduce Iranian influence in the war-ravaged country, where Hezbollah and other Shiite militias supported by Tehran have provided shock troops for Assad’s offensive.

To understand Putin, you have to understand Russia and its past. The country witnessed the fall of the monarchy, the collapse of democracy, the great depression, World War II with millions of Russians dead, Stalin’s brutalities, the collapse of communism, the breakup of the Soviet Union, and finally the reign of Boris Yeltsin which was mired by chaos and corruption. Amid all this chaos, the Russians excelled in many key areas.

The military-industrial complex remained a significant factor in the post-war Soviet Union. By 1949 the USSR had developed the atomic bomb, followed four years later by a successful hydrogen bomb test. Then came the Soviet space programme. Between 1946 and 1964, Russia went through the period of fastest increase in life expectancy in its history. It should be noted that Joseph Stalin was still in power until 1953.

After all this comes Putin and his idea of stable and powerful Russia.

In his first speech in the State Duma in 1999, he said, “Russia has been a great power for centuries and remains so. It has always had and still has legitimate zones of interest … We should not drop our guard in this respect, neither should we allow our opinion to be ignored,” he said.

His domestic policy was to restore stability, to end what he called the “revolutions” that had brought Russia low. Since then, he has seized every opportunity that history has offered him to secure Russia’s interest.

During his first presidency, the economy grew for eight straight years, and GDP measured in purchasing power increased by 72%. The growth was a result of the 2000s commodities boom, high oil prices, and prudent economic and fiscal policies.

Syria is a testing ground for the next generation of Russian weapons and military equipment items and Kremlin is advertising them openly through state-sponsored media outlets.

Russia’s operation in Syria is officially an aerial one and it has frequently used its multi-role air superiority fighter SU-35s. Since the start of war, many nations have shown interest in this fighter. China acquired 24 of them in November 2015 for $2 billion and Indonesia purchased 10 in April 2016 for $1.14 billion.

According to the Russian state-owned media outlet TASS, the United Arab Emirates is all set to purchase more than a dozen advanced Su-35S Flanker-E fighter jets from Russia. Turkey and Saudi Arabia have already signed a deal with Russia to arm their forces with Russian S-400 anti-aircraft missiles, a move which has irked Washington.

From 2000 to 2010, Russia sold around $1.5 billion worth of arms to Syria, making it the seventh-largest client of Moscow. During the Syrian civil war, Russia threatened to veto any sanctions against the Syrian government, and continued to supply arms to the regime.

By engaging itself in the Syrian conflict, Russia has gained economically and politically.

Middle East: Achilles heel for the US

At its height, the Roman Empire stretched from the Atlantic Ocean all the way to the Euphrates River in the Middle East. However, the expansion was also one of the main reasons for its decline.

Similarly, America is going through the same phase. Its misadventures in the Middle East wreaked havoc on the region and resulted in the rise of Islamic extremism. The War on Terror launched by George Bush was an epic failure like the War on Drugs and in both the cases, the problem actually increased in the coming years.

Putin has tactfully neutralized the US in the Middle East because of its failure in providing any viable solution to the war-torn region and its allies.

He has successfully achieved his goal and has secured vital Russian interests in the region. He backed Assad when the US wanted him out and secured Russia’s military presence in Syria for the next 49 years. The Saudis want Russia to play a bigger role in the region and Turkey is working together with Russia and Iran to setup de-escalation zones in Syria. This deal has helped to restore ties and bilateral trade between Moscow and Ankara.

Thus, Putin has reduced US ability to maneuver militarily in the region and has also assured Russia’s dominance in the Middle Eastern affairs.

Compared to the US, the Russian campaign in Syria has been pretty cheap and the country is now planning to withdraw itself from the conflict while ensuring its presence and influence in the region at the same time.

Putin has successfully demonstrated to the world that Russia is a better power broker compared to the US and that it can secure the interests of its allies in a more efficient way.

In conclusion, Russia under Putin is the next big boy on the block, one who is willing to play a bigger role in international affairs and negotiate with the West on its own terms.