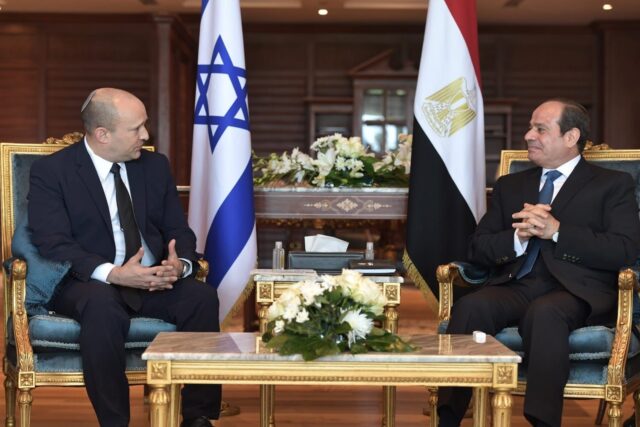 On 13th September 2021, the leaders of Egypt and Israel met as the first official meeting took place over in a decade. Since 2010, it is the first official visit by an Israeli Premier. The last visit happened when the then Egyptian President Hosni Mubarak hosted a summit with Mr Netanyahu, Palestinian President Mahmoud Abbas and U.S. Secretary of State Hillary Clinton. It was less than a year later that the country faced a popular uprising that ultimately brought Hosni Mubarak down from the position.

The meeting between Egyptian President Abdel Fattah el-Sissi and Israeli Prime Minister Naftali Bennett has signalled the foundation of strengthening of the relations and also better cooperation between these two countries. The Israeli Premier after the meeting thanked Mr El-Sissi for his country’s role in stabilizing Gaza and its help with Israeli missing and captives from Israel’s conflict with Hamas. As per reports, the agenda for the meeting included the rising tension in the Gaza strip in addition to Ethiopia’s dam on one of the Nile River’s tributaries, which Egypt sees as a threat to its water supply. Further Prime Minister Bennett stated that the talks covered diplomacy, security and the economy and that we created a foundation for a deep connection going forward.  Egypt was the first Arab country to sign a peace treaty with Israel in 1979 but relations have been restricted to security cooperation and limited economic links. Over the years, Egypt has served as a mediator between Hamas and Israel especially in the recent months when Egypt brokered a cease-fire that has largely brought the fighting to a stop. Egypt has been trying to make that into a long-term truce, but those efforts appear to have run into trouble in recent weeks. Hamas has demanded a lifting of the blockade, which has devastated Gaza’s economy. Israel wants Hamas to free two captive Israeli civilians and to return the remains of two dead soldiers killed in a 2014 war. In recent days there has been an increase in demonstrations around the border have led to the seriousness of the situation. Egypt is working towards reconciliation between the Palestinian Authority, Hamas and other Palestinian groups to establish stability and peace in the region.