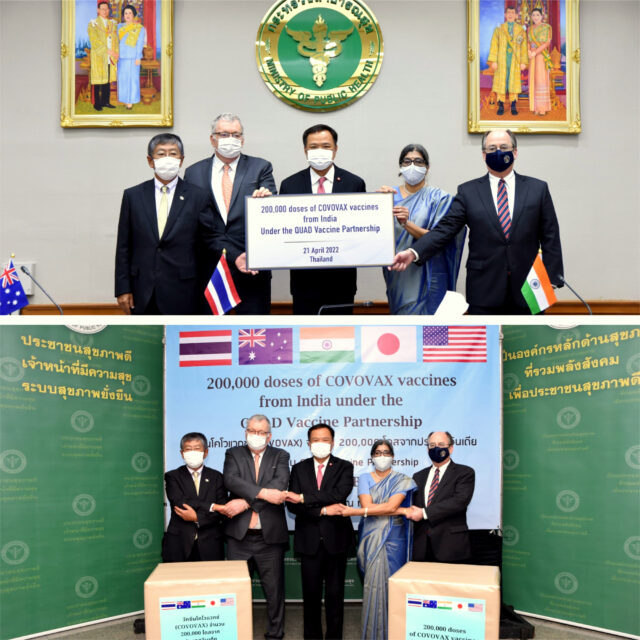 India, under the cause of its ‘Neighbourhood First’ policy and understanding of its role as the ‘net security provider’ of the region, began providing COVID-19 vaccines on a priority basis to its immediate neighbours in early 2021. Between January and April, India either sold or granted a total of 19,542,000 vaccine doses to countries in the region. As a Quad member, India has really looked forward to the promise of the Quad countries, that is, “to expand and accelerate production [of vaccines] in India” for the Indo-Pacific region.

It has been reported that in May 2020 Prime Minister Shri Narendra Modi had a telephonic conversation with Prime Minister Gen. Prayut Chan-o-cha. The two leaders exchanged views on effectively dealing with the COVID-19 pandemic and agreed to collaborate on Research and Development in the field of medical sciences and vaccine development.

Carrying forward this promise of mutual medical diplomacy, India, on Thursday provided Thailand with a supply of 200,000 doses of India-made Covovax vaccines as part of a flagship initiative of the Quad grouping to help countries combat the coronavirus pandemic. The vaccine doses were received by the Thai Deputy Prime Minister Anutin Charnvirakul in Bangkok by India’s Ambassador to Thailand Suchitra Durai, Australian envoy Allan McKinnon, Japan’s Nashida Kazuya and US Charge d’Affaires James Wayman, the Ministry of External Affairs (MEA) said. “The consignment comprising 200,000 doses of Made in India, Covovax vaccines was presented to Anutin Charnvirakul, Deputy Prime Minister and the Minister of Public Health of Thailand on April 21 in Bangkok,” it said.

This consignment of vaccines is the second one that has been delivered by India under the Quad vaccine partnership, right after the inaugural supply on April 12 which was made to Cambodia.

The MEA also said in a statement, “The Quad countries have so far provided Thailand four-and-a-half million COVID-19 vaccine doses. Quad countries have also provided last-mile delivery assistance and monetary support to ensure that vaccines are translated into vaccinations.”

India has extended its support to Thailand during the time of a worldwide medical emergency. This expansion in medical diplomacy has also been appreciated by Thailand and it has conveyed gratefulness for the vaccines received from the Quad and for its collective assistance to the country. The Quad vaccine partnership was announced by leaders of the USA, India, Australia and Japan at their first summit on March 12 last year.