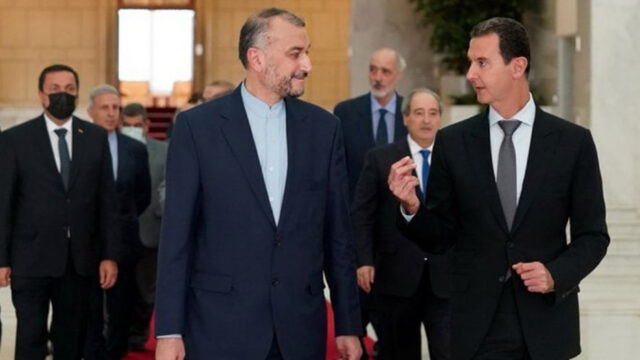 The Iranian Foreign Minister Hossein Amir- Abdollahian arrived in Damascus, the capital of Syria to discuss matters of the “Economic Terrorism” that the two countries were facing. The announcement came after a high level exchange between the two countries. Iran and Syria have been facing sanctions by the international community including the United States.

Iran has been the litmus test for American administrations time and again. Its insistence on developing the nuclear weapons programme and the consequential reaction from the international community has led to sanctions against the country. While efforts are being taken to reach a conclusive agreement in the negotiations with Iran, many external as well as domestic factors have resulted in a stalemate in terms of any breakthrough.

Syria has also been facing sanctions due to its current leadership, the accusations against the country for sponsoring terrorism and even for using chemical weapons against civilians. There were fresh sanctions imposed in 2020 and that has led to major economic crisis in the country.

After the meeting between the officials of both the countries, they vowed to “take mighty steps” to fight against the American sanctions and what they called as “economic terrorism”.  Iran continues to be a major supporter of the Syrian President Bashar Assad who has been condemned by many western countries. The Times of Israel reported that the Iranian Foreign Minister stated that the two countries will work together to make things better for the people and reduce the pressures.

There have been reports of new optimism with the new leadership in place. The Iranian Foreign Minister explicitly shared his opinion about getting together with Syria to solve regional matters too. For him, external interference will further challenge possibilities of sustainable regional security and stability. Iran has come forward to extend support to Syria for fighting all forms of terrorism. Economic terrorism for both the countries is the functioning of sanctions that have posed many threats to the basic livelihood.

This alliance does not come as a good news for the western countries. Iran is slowly rising in terms of its support for rogue states. On one hand, there are ways being tried to make Iran a part of the international order. On the other, announcements  like these lead to hurdles in global peace. The US has been eying the Middle East-North Africa nexus for some time and is wary of the developments there. It is also worth noting that both countries share a cordial relationship with Russia too. Thus the actual meaning of the resolve is now to be seen.