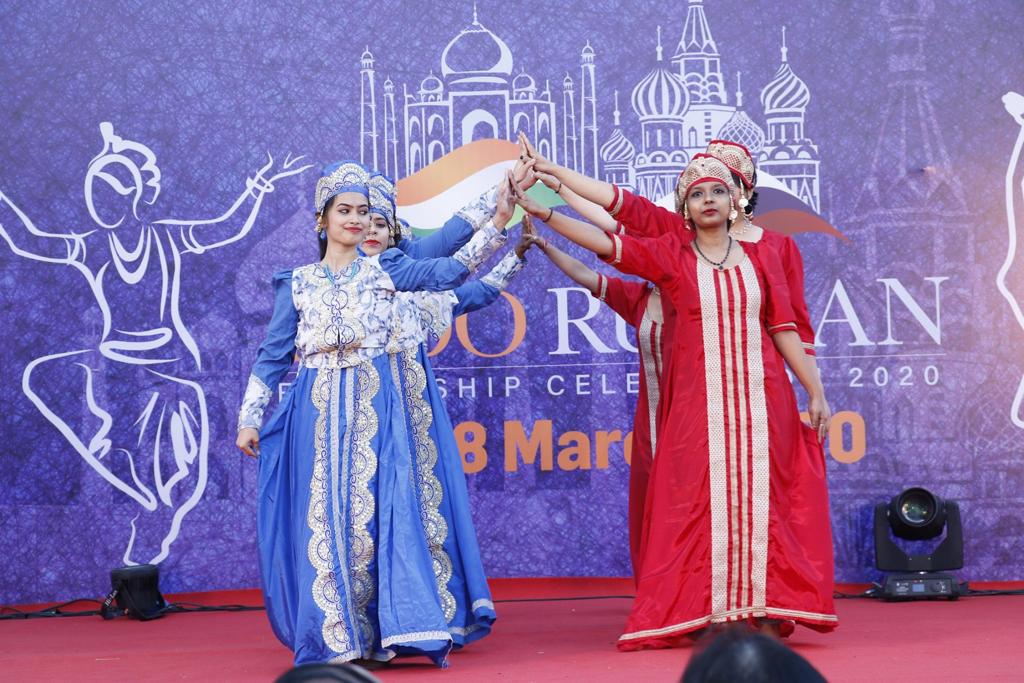 The interest in Russian culture among Indian youth prevails and looking at the success of the interdisciplinary course “Introduction to Russian Culture” in the University of Delhi, we should find ways of reaching out to many more interested people all over and deeper into India

Russia-India relations, whether political, defence, diplomatic or cultural, have been revered for centuries in both countries. The cultural relations are the most sought after when we look at the mass appeal due to strong friendly ties between India and Russia, who have time and again shared their rich cultural heritage. People in India eagerly wait and we see them thronging to various events on Russian art, music, dance, food, cinema, which are regularly organized especially by the Cultural Department of the Embassy of the Russian Federation in India, including those events on Russian language & literature which are organized by the Embassy in collaboration with various institutions in India. Our mutual relationship is going strong even in the crisis which the world is facing in the present times.

As we all know that language is a part of culture and culture in so many ways is reflected only through language, it was decided to start Russian language teaching in Delhi University in the ’40s of the last century and later in many higher educational institutions all over India. The Russian culture has been taught specifically to the students of the Russian language but in the history of Russian Studies in India, the Department of Slavonic Studies at Delhi University began teaching a new interdisciplinary course titled “Introduction to Russian Culture” at the master’s level. This course is open to M.A. students of any stream at the university. They can choose this as an open elective course. The course began in January this year with a group of seventy students from various M.A. streams, including students from Sanskrit, Hindi, French and many students of English literature. My experience of teaching this course at Delhi University before and during the crisis which the whole world is facing has been challenging and unique in many ways.

The students didn’t know the Russian language at all, so I was wondering that it will be difficult for them to feel the essence of Russian culture. My decision to use audio-visual method turned out to be perfect, I began my first introductory class with showing on the big screen a famous song “Go forward, Russia” by Oleg Gazmanov which is popularly considered as ‘Russian Anthem of Patriotism’ and its video shows Russia with a varied symbolic representation of Russian culture. Before showing the film, the students were given a task to identify in the film, the ‘unique’ in Russian culture and its people.

Gazmanov’s video touched the hearts of everyone in the class and students recognized the unique in Russian culture by listing following areas: Military Might, World War II, achievements in the fields of Space, Sports, sheer strength, strong will power and most important the ‘vastness’ of Russia both in geographical and philosophical aspects. I also showed them documentary films on Russia, video clips of folk dances and Russian cities. Thus, for the rest of two and a half months before the pandemic crisis began in India, we had remarkably successful conduct of this course through audio-visual teaching methods, whatever I taught was accompanied with audio-visual material.

Interestingly, most of the students pointed out to the topic of World War II in Russian life and after my explanation accompanied again with Oleg Gazmanov’s song and video “Immortal Regiment” they understood as to why this topic appears again and again as almost all families in Russia have lost a family member or more fighting in this war. You will be surprised to know that in 15 minutes they learnt the first two stanzas of the famous war song “Katyusha” in Russian. We had plans to shoot a final video of the whole group singing ‘Katyusha’ for the Victory day celebrations but couldn’t fulfil this due to lockdown in March.

After the introductory lessons, we started the introduction to Russian History from ancient to present times through animated films together with presentations. Within a span of a month, the students had a broader idea of the historical background as well as the cultural life of Russia through various centuries.

We managed to discuss Religion in Russia, its history and development. We discussed the main features of Orthodox Christianity and the most famous Russian Icon “The Holy Trinity” with the help of video material. The second topic we did was Russian painting, its history and development. We analyzed some of the famous masterpieces of Russian painting which included “Bogatyri” (The Warriors) by V. M. Vasnetsov and “Barge Haulers on the Volga” by Ilya Repin. The next topic was of Russian ballet and we managed to study Pyotr Tchaikovsky’s “The Swan Lake”, “The Nutcracker” and “The Sleeping Beauty”. Again, audio-visual material made teaching interesting and effective.

Russian literature was supposed to be the next topic but we could discuss only Alexander Pushkin‘s life & his world-famous masterpieces including “Eugene Onegin” which is considered the encyclopedia of Russian life at the beginning of 19th century and “the Tales of Ivan Belkin” which comprises of five stories. The works were introduced through summary telling and reading of their translations into English. One more author we read was Anton Chekhov, his biography and his short stories like “the Fat and the thin”, “Death of a Clerk”, “the Grasshopper”.

During this time, we saw publicity material on the social network about the India-Russia Celebration being organized by the Russian Embassy in India in collaboration with the Ministry of Culture, Government of India. My students willingly performed Russian Fairytales, folk dances, and Russian games at the celebration on 8th of March 2020. They made their Russian costumes and performed with great interest. They also got a chance to try Russian food – courtesy the Russian Embassy. The photos below can express more than words:

The course “Introduction to Russian Culture” was going on successfully. In my opinion, it couldn’t have been better except for the pandemic crisis which put us in lockdown from 16th March 2020. In all the uncertainty and taking inspiration from the life of Alexander Pushkin who was also under quarantine in 1830 for three months due to pandemic of plague and remembering that these three months were highly productive for Pushkin in terms of the number of literary masterpieces he produced, we immediately shifted to online methods of teaching and continued our course by watching and discussing Russian cinema, classics like “Moscow doesn’t believe in tears”, “Irony of Fate”, “Ballad of a Soldier”, “Fate of a man”. I also regularly organize Google quizzes and celebrated Pushkin’s 221 birth anniversary with a Quiz on his life and works, poetry reading videos & plan to do a Quiz on Russia, its culture on 12th June 2020 on the occasion of Russia Day celebrations. The students have been actively participating and eagerly waiting for such events and the desire to choose next open elective course in final year M.A. which is “Russian Folklore”.

The interest in Russian culture among Indian youth prevails and looking at the success of the interdisciplinary course “Introduction to Russian Culture” in the University of Delhi, we should find ways of reaching out to many more interested people all over and deeper into India.