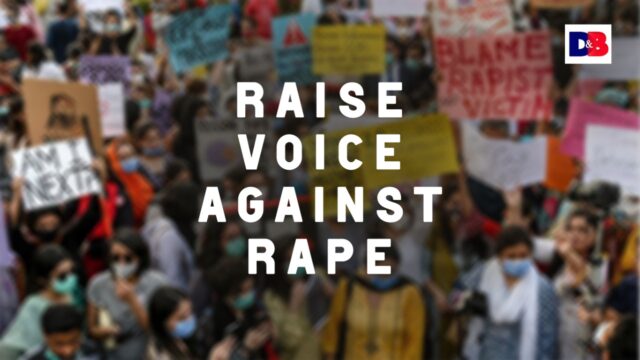 In 2015, the United Nations General Assembly embraced Transforming our World: the 2030 Agenda for Sustainable Development. It aims to “achieve gender equality and empower all women and girls, eliminate all forms of violence against all women and girls, ensure equal opportunity and eliminate discriminatory laws, policies and practices”. Most of the governments have committed and recommitted to ending violence against women and girls, yet global statistics on sexual assault against women are on the rise. Despite the attention on the issue of sexual violence are not only on the national but international level, the problem is only getting worse. Human Right Watch has identified this issue as a high level which needs immediate action, they have asked for laws that discriminate against women to be repealed, provide protection, eliminate police bias against female victims and also to eliminate judicial biases against women. These measures cannot be just limited to being enacted, it needs to make an impact in changing attitudes and the women/victims need supporters.

The UN report’s data has made it evident that rape and other forms of sexual violence have been increasing but the cases reported vary at a low percentage, country to country. The United States reports only 16% while in South Africa it’s as low as only 3%. Rape is a mammoth issue that plagues the world. It is not specific to one country and neither to any race, gender, age, or financial status. According to government data in India, a rape occurs every 15 minutes in the country. The reason why its one of the most underreported crimes is due to the many stigmas that go along with it leading to the victim feeling victimized.

A gang-rape case in India, in 2012 shook the nation. The case led the country to erupt into protests leading India to make many changes in rape laws where speedier trials and harsher punishments would lead to crimes against women to decrease. The case took seven years to go through India’s judicial system which led to the Indian society losing hope in any societal changes in the attitude towards rape or any other form of sexual assault. The fact that most cases take years to give a verdict, has not helped and the manner of investigation only leads to more trauma for the victims. On the other hand, many victims have come ahead and reported crimes but police have not registered a formal complaint. This highlights the attitude the police system has either towards women or the fact the rape can be treated with negligence.

The fact that even international action to prevent sexual violence hasn’t made any prominent impact, is not surprising since a country’s judicial system is often against women who make complaints. Even in Pakistan, police often refuse to register a complaint and in Peru, women have had to issue summons to their abusers through the police. In Jordan, women victims are put in prison in the name of protective custody. With these examples, one can make out that most countries have a hostile attitude towards the victims. Sexual violence against boys is quite prevalent in many countries, a study finds that there are almost 21% of sexual assaults against boys in India, 8% in Chile, 17% in Rwanda. The study also says that in South Africa there is 9.6% of men victims harassed by their gender. Therefore, as mentioned earlier, it is an assault that exists for all.

Progress in terms of institutional procedures are occurring slowly, many countries now are training police officers and court prosecutors, and various organizations are offering support and creating awareness through campaigns on the wrongs towards women and their rights. Social media is playing a huge role in spreading awareness and giving voices to the victims. It is helping many remote cases reach higher authorities, building a supportive society, and even many individuals/organizations lending a helping hand to the victims. Even with these efforts, the cultural understanding of rape has to change to a culture where victims are supported and encouraged to speak up. But this is not partial only to women, this problem extends to other genders as well.

Rape is one of the most appalling incidents that can happen to a human being and yet, the attitude towards it is quite evasive. It needs to change, the attitude and mentality towards such heinous acts need to be made aware, sensitized and changes need to happen with a bottom-up approach as well as a top-down one. The taboos attached to such acts need to be cut off, society needs to change, the systems need to change and become more involved and take actions against this huge problem.

Iceland Model for the World