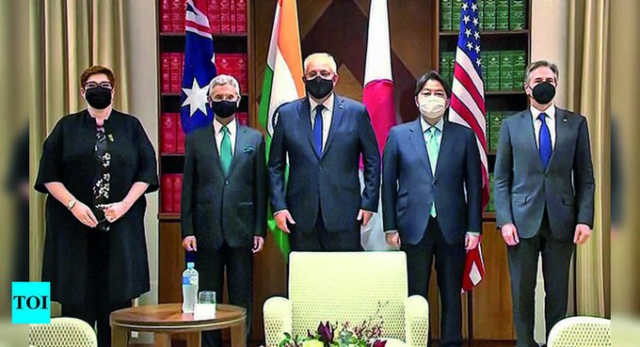 In Melbourne, where Foreign Ministers of India, Australia, Japan and the US are meeting, a strong message was sent against those indulging in cross border terrorism and threatening to disrupt peace and stability in the Indo-Pacific region.

The leaders also criticized North Korea, which has been testing ballistic missiles and destabilizing the region. The launch of missiles are against United Nations Security Council Resolutions, the leaders reiterated.

The joint statement issued by the Indian, Australian, Japanese Foreign Minister and the US Secretary of State named North Korea explicitly; the statement had veiled references to Pakistan and China.

The statement issued post meeting did not name Pakistan, however called upon all countries to ensure that their soil is not used to launch terror attacks. The statement also denounced terror attacks in India, including the 26/11 Mumbai and Pathankot attacks.

The statement also, “urged countries to work together to eliminate terrorist safe havens; disrupt terrorist networks and the infrastructure and financial channels which sustain them, and halt the cross-border movement of terrorists.”

The ministers also shared that Afghanistan must be stopped from becoming a terrorist safe haven.

On the Indo-Pacific region, Quad members reaffirmed their commitment to keep it free and open and added that Indo-Pacific—”a region which is inclusive and resilient, and in which states strive to protect the interests of their people, free from coercion.”

The Japanese Foreign Minister said that the QUAD summit will take place in Japan in the first half of 2022.

The meeting of the four countries has generated a lot of interest as it happens when tension is escalating in Europe over Ukraine and China aggressively posturing in the Indo-Pacific region.

There were differences over the Ukraine issue, as India chose not to take a hard stance against Russia. The joint statement made no mention of the crisis.