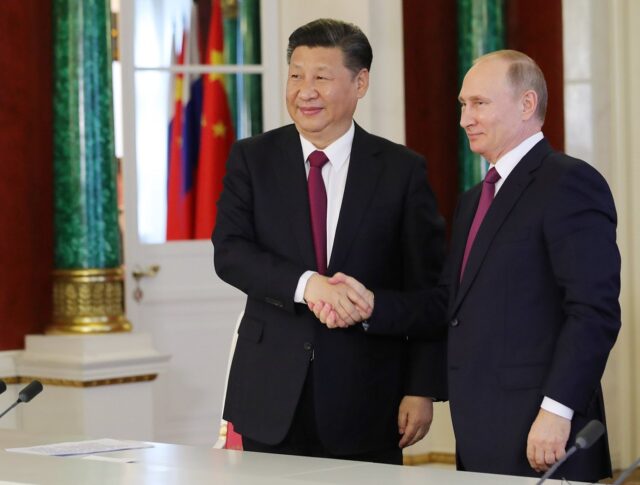 According to a Chinese Foreign Ministry release, the Chinese President Xi Jinping and Russian President Vladimir Putin are going to hold talks today. The meeting is going to be an online event.

As per the ministry’s announcement, both leaders are going to discuss developments in bilateral relations and cooperative achievements in various fields. The two leaders are also going to look at the future path of the bilateral ties and exchange their views concerning international and regional issues.

The meeting, according to the Chinese Foreign Ministry, is going to deepen mutual trust, push for strategic coordination and comprehensive cooperation between Russia and China.

According to the Kremlin spokesperson, the Russian and Chinese presidents will exchange their views on “international affairs,” especially the recent tension in the European continent.

Dmitry Peskov, the Russian spokesperson will discuss collaboration and cooperation in the field of “energy, cooperation in hi-tech, joint investments and trade.”

Analysts will be keenly observing the outcome of these talks. The meeting takes place amid rising tension between Russia and Ukraine and NATO. It is speculated that the aggressive US rhetoric will also be discussed in the meeting.

During a recent call between the US President Joe Biden and Russian President Vladimir Putin, the US president had warned Russia with economic sanctions if it decides to invade Ukraine. The Russian President maintained that the Russian troops were in their own territory and they did not threaten anyone.

Putin wants that any NATO expansion should not include Ukraine, which both the NATO members and the US have rejected.

Tension between China and the US has also escalated in the last one year. The US leadership has raised concern over Chinese aggressive posturing in Taiwan. The US has repeatedly raised concern over issues like the COVID-19 pandemic, minority rights in China, especially the Uyghurs in Xinjiang province, trade practices.

There are many similarities between Russia and China when it comes to approaching the Iran nuclear talks, Syria, Venezuela. The two sides have pushed to lift UN sanctions on North Korea.

Russia and China have been facing increasing scrutiny in their “internal matters” by the US and its allies in recent years. The two powerful nations have worked in tandem to counter US domination in the world economic order.

Observers believe that a united front will send a message to the US that they are united.