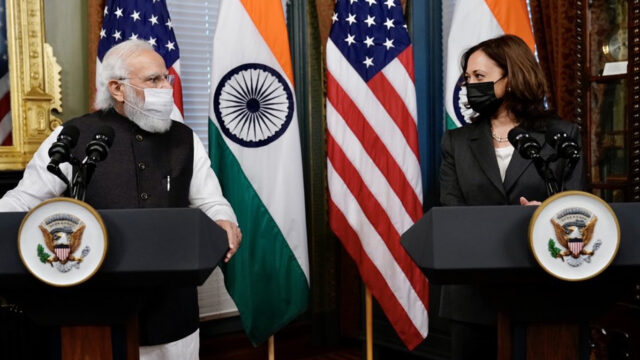 This trip aims to serve three purposes – participation in the Quad summit, addressing the General Assembly and holding the bilateral meeting with US President Joe Biden. This is Prime Minister Modi’s first visit to America after President Biden came into power.

Among the issues discussed with Vice President Harris, bilateral talks included initiatives to fight the pandemic, global initiatives towards climate change, space collaboration, cooperation in the health sector, and developments in Afghanistan. One of the important things discussed was the role that Pakistan could play in combating terrorism. Both pondered upon the importance of a free and open Indo Pacific region. The meeting between the two leaders ended on a positive note with acknowledgement of the other’s relevance from both the ends.

Prime Minster Modi also met the top business honchos of US to discuss future collaborations. They discussed leveraging technology for “greater public good and tech opportunities” in India. In his interaction with Shantanu Narayen from Adobe, Prime Minister Modi emphasised on the need to support Indian Start-ups and boost innovation. The investments in solar energy and green hydrogen mission were also talked about. The aim of these meetings was to improve the economic relations between the two countries and the business leaders appreciated the new policies that were taken under the leadership of Prime Minister Modi.

This visit has been a source of discussion for several reasons due to the current scenario in the international politics. The travel in the midst of a pandemic and in the unraveling of the Taliban’s takeover in Afghanistan indicates the strategic relevance. There are many things expected from this visit. India and the US have mutual interest in containing or at least competing with the Chinese rise. American support to Indian engagement with Afghanistan will be a source of comfort even if it is indirect. After the pandemic, several economies are struggling to recover. A stronger alliance between the two countries will help both in attaining progress towards the same. In the bigger picture, this visit will bring clarity to the Indian positioning on the global map especially within the current narrative that promotes the alignment of democracies.