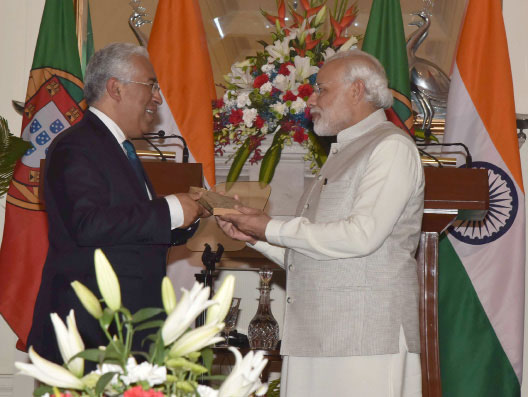 Today relations with Portugal remain close, friendly and devoid of irritants.The arrival of Vasco da Gama, a nobleman from the household of the King of Portugal, at the port of Calicut in south-west India on 27 May 1498 inaugurated a new chapter in Indian history. In 1487, the Portuguese navigator, Bartholomew Dias, rounded the “Cape of Good Hope”, and so opened the sea route to India. The coming of the Portuguese introduced several new factors into Indian history. It not only initiated what might be called the European era, it marked the emergence of naval power.  Doubtless, the Cholas, among others, had been a naval power, but for the first time a foreign power had come to India by way of the sea; moreover, Portuguese dominance would only extend to the coasts, since they were never able to make any significant inroads into the Indian interior.  The Portuguese ships carried cannon, but the significance of this is not commonly realized, especially by those who are merely inclined to view the Portuguese as one of a series of invaders of India, or even as specimens of ‘enterprising’ Europeans whose mission it was to energize the ‘lazy natives’.  For centuries, the numerous participants in the Indian Ocean trading system – Indians, Arabs, Africans from the east coast, Chinese, Javanese, Sumatrans, among others – had ploughed the sea routes and adhered to various tacit rules of conduct.  Though all were in the trade for profit, as might be expected, no party sought to have overwhelming dominance; certainly no one had sought to enforce their power through arms. Five hundred years ago, after Vasco da Gama’s belligerent arrival in Calicut, the Portuguese were busy transforming the Indian subcontinent into a strategic hub for their Asian empire, opening the way for the world’s first era of globalisation.

Relations between India and Portugal began amicably in 1947 after India’s independence and diplomatic relations were established in 1949. Bilateral relations however went into decline after 1950 over Portugal’s refusal to surrender its enclaves of Goa, Daman Diu and Dadra and Nagar Haveli on India’s west coast. By 1955, the two nations had cut off diplomatic relations, triggering a crisis which precipitated the liberation of Goa by Indian military forces, ending Portuguese rule over Indian enclaves in 1961. It brought to an end, 451 years of Portuguese overseas provincial governance in Goa.  With the signing of a treaty in New Delhi on December 31, 1974 with the new democratic Portuguese Government, the two embassies were re-established and amicable bilateral relations were restored.

Since Brexit, India has lost its traditional pathway to Europe. Due to the historically close ties and many trade agreements with Britain, the modus operandi until now was for Indian companies to invest and produce in Great Britain and then, export it to the rest of Europe.Now, India needs another partner country in Europe to take advantage of the common market. India has strong economic interests in the Netherlands, which continues to be one of the top destinations for outward Indian FDI.

However, in the volatile global macroeconomic climate, India should look to hedge its investments and seek another country in Europe that can act as a gateway.India needs other partnerships to help navigate the complex mechanisms of the EU. As it stands, the EU is not looked upon as a credible strategic actor internationally. Apart from matters of trade and investment, emerging Asian countries like India prefer to interact directly with the member-states of the EU and vice-versa.This is exactly where Portugal comes into the equation. Portugal can be one of the contenders to fill the void left by Britain. Presently, India’s business presence in Portugal is quite minimal. Still, Portugal offers a good business environment, well-developed physical and IT infrastructure and a favorable climate for both short term and long-term investment. It takes around 46 minutes to set up a business there compared to 89 days in India.Its strategic location can make it a promising gateway to the European common market.Importantly; Portugal also has one of the lowest labor and operational costs in Western Europe. In addition to its European Union membership, Portugal retains close ties with Brazil, Mozambique, Macau and Angola and can serve as ‘gateway’ to other Portuguese-speaking markets.

With India emerging as a rapidly growing major economy and Portugal increasingly looking at key developing countries like India for enhancing trade and investment since the economic crisis of 2008, both countries are looking to deepen economic engagement. Bilateral trade has been growing steadily over the last few years but remains modest at $692 million in 2015-16. Portuguese investments into India amounts to $36.4 million and Portugal ranks 56th in terms of the overall FDI inflow into India. With Portugal and India sharing similar priorities in terms of boosting domestic economic growth, investment, employment, industry and innovation, there are several sectors with complementarities where partnerships can be forged to mutual benefit, such as: infrastructure (roads, ports, inland waterways), renewable energy (wind and solar), ICT (Start Ups), Water & Waste Management, Agro-Processing, Tourism and Hospitality. Bilateral Trade has been growing steadily during the past few years. However, 2014-15 saw a decline in bilateral trade by 19.18 percent with respect to 2013-14. Bilateral trade last year (2014-15) further fell by- 11.43 percent with total trade standing at $692.19 million. Total exports from India to Portugal amounted to $589.64 million and total imports from Portugal stood at $102.55 million, the trade balance remaining in favor of India. The dip in bilateral trade could be seen as a reflection of the slowing down of the European economy and India’s overall trade (India’s global imports also fell by 15.04 percent and exports by 15.57 percent during this period. Indian exports to the EU also declined by 9.7 percent and imports by 10.8 percent during this timeframe).

Portugal ranks 56th in Foreign Direct Investments to India, with total FDI inflows amounting to 36.49 million (as on 31 March 2016).

An Education exchange Programme (EEP) between India and Portugal for the years 2007-2010 was signed in 2007. The EEP has been extended for another three years from 2016-19. Both sides are considering a new MOU on Cooperation Programme in the fields of Language, Education, Science, Technology, Culture, Sports, Youth and Media, for 2016-19 in place of the existing EEP. In 2014, India was among the top 5 countries for inbound tourism into Portugal. 44,616 Portugese tourists visited India in 2015, mainly in July and August. Electronic Tourist Visa facility has been extended to Portugese nationals since 27 November 2014 and is expected to further increase tourist flows into India. Architectural restoration, hotel industry, tourist services, maintenance of heritage sites and tourism infrastructure are potential sectors of bilateral collaboration in the strategic dimension, India and Portugal must work together to meet across Africa. On the maritime front, the security of the Indian Ocean begins in the Atlantic, and vice-versa, demanding greater cooperation and coordination. The Portuguese, Brazilian, Angolan, Mozambican and Indian navies should establish a closer dialogue and joint exercises with a focus on out-of-area deployment, non-conventional maritime threats such as piracy, and other security trends in the Southern Indo-Atlantic region.

Similarly, Portugal and India have vast experience in contributing personnel and resources to United Nations-mandated peacekeeping missions in Angola, Mozambique and Timor-Leste. This offers a potential convergence in various military-technical cooperation domains, including under the Community of Portuguese Language Countries umbrella, which has been developing the idea of a joint CPLP peacekeeping force and training missions.

It is now time for Portugal and India to revive this legacy and explore its economic potential in the 21st century and strategically couch their relationship in the context of the Portuguese-speaking countries. Prime Ministers Antonio Costa and Narendra Modi could pursue this partnership for a better relationship and future.