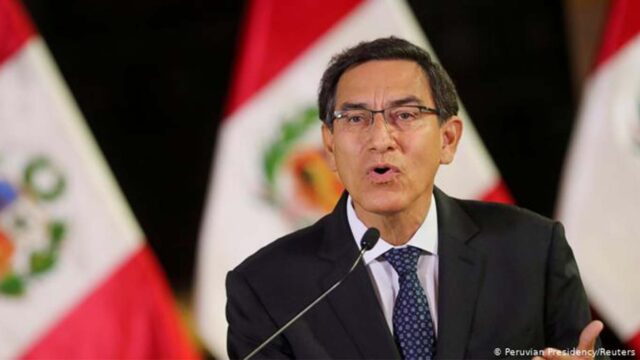 November 10, 2020: Peru’s congress on November 9 voted to impeach president Martin Vizcarra over corruption charges. The president was also criticised for his handling of the coronavirus pandemic. The country has been thrown into a state of political uncertainty due to the president’s impeachment.

Mr Vizcarra and his supporters have rejected the corruption allegations against him as “baseless” and “false.” The now impeached president had warned of “unpredictable consequences” earlier if lawmakers impeached him just months ahead of the election, in which he is not eligible to run.

Opposition lawmakers from nine parties in Peru’s unicameral congress came together to bring 105 of Peru’s 130 lawmakers in favor of impeachment. The parliament had started impeachment hearings on grounds of “moral incompetence.”

His impeachment came as a shock to many since he was expected to survive the vote. Earlier, Peru’s Constitutional Court rejected an appeal by President Vizcarra to suspend the impeachment vote. Mr Vizcarra’s term was set to expire in July 2021. Manuel Merino from the minority Popular Action, is expected to take on as the interim president for the remaining term.

This was not the first impeachment attempt on Mr Vizcarra. Opposition lawmakers attempted to oust Vizcarra in September but did not get enough votes in a separate impeachment trial. The September impeachment trial was  over alleged links to a case of irregular government contracts with a singer. Mr Vizearra said he would not challenge the decision in the courts and would step down as head of state.

“Dear Peruvian People: During these two years and eight months of government, you have been my greatest support and strength. Together we build this path, despite adversity. I leave with a clear conscience, my head held high and my duty accomplished. Until another chance,” he tweeted on November 10.

The centrist Mr Vizerra has himself campaigned against corruption for a long time and has gained popularity among the Peruvian people. However, many in the Peruvian congress didn’t agree to his policy and had acrimonious standoffs over his anti-graft policies.

Many public figures and commentators termed this impeachment as a coup. Augusto Alvarez Rodrich, a political commentator and columnist wrote, “Those who will be most harmed by this coup will be the citizens.”  “They face a gloomy outlook, in the middle of degradation of politics for ambitious, insatiable and illegitimate personal interests,” he said.