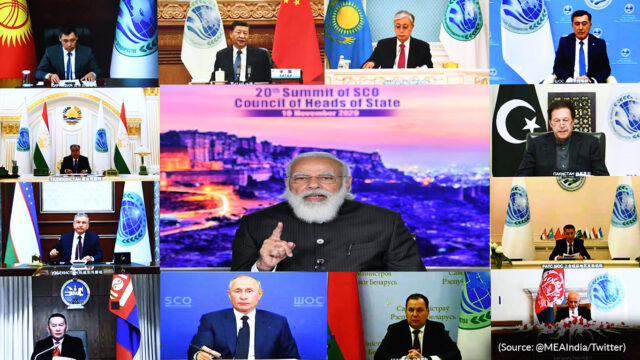 “it is unfortunate that repeated attempts are being made to unnecessarily bring bilateral issues in the SCO agenda, which is in violation of the SCO Charter and Shanghai Spirit. Such efforts are discordant to the spirit of consensus and cooperation that defines SCO,” said Mr Modi in his address. He was responding to Pakistan’s attempts to raise the Kashmir issue at SCO.

Mr Modi was speaking at the 20th Summit of SCO Council of Heads of State held on November 10, 2020 via video Conference. China’s President Xi Jinping, Pakistan’s Prime Minister Imran Khan, Secretary General of the SCO Secretariat, Executive Director of the SCO Regional Anti-Terrorist Structure, and the Presidents of the four observers states of the SCO Afghanistan, Belarus, Iran, and Mongolia were present at the virtual summit.

He also emphasised that connectivity projects should respect “territorial integrity” of the countries. “India maintains close cultural and historical ties with the SCO nations…India believes that to further deepen connectivity, it is necessary to carry forward with the core principles respecting each other’s sovereignty, and territorial integrity,” he said.

China’s president Xi Jinping in his address urged addressing global issues through consultation while adding that terrorist, separatist and extremist forces should be dealt firmly. “History has proven and will continue to prove that good neighborliness and friendship will prevail over a beggar-thy-neighbor approach, mutually beneficial cooperation is certain to replace zero-sum game, and multilateralism will win over unilateralism,” quoted Xinhua news agency.

Mr Modi, in his address, highlighted the imperative of a reformed multilateralism to meet the expectation of a world suffering from the social and financial after-effects of the coronavirus pandemic. He highlighted that India, as a non-permanent member of the UNSC, will focus on the theme of ‘reformed multilateralism’ to bring about desirable changes in global governance. India’s term at UNSC starts on January 1, 2021.

Furthermore, Mr Modi underlined India’s strong cultural and historical connect with the SCO region and reiterated India’s firm commitment towards strengthening connectivity in the region with initiatives like International North-South Transport Corridor, Chabahar Port and Ashgabat Agreement. He also extended full support to observing the 2021 as the “SCO Year of Culture” and spoke of India’s own initiatives to hold the first SCO exhibition on Shared Buddhist Heritage to be organized by National Museum of India, SCO Food Festival in India next year and the translation of Ten regional language literary works into Russian and Chinese. SCO’s official languages are Russian and Chinese.

India has also proposed to set up a Special Working Group on Innovation and Startups and a Sub Group on Traditional Medicine within SCO. Mr Modi in his speech elaborated on India’s vision of a “Aatma Nirbhar Bharat” (Self-reliant India) in the post-pandemic world that could prove to be a force multiplier for the global economy and the economic progress of the SCO region.

India became a full member of SCO in 2017. Founded in 2001, SCO is a permanent intergovernmental international organisation and often touted as a counterweight to the North Atlantic Treaty Organisation (NATO). SCO has 8 members viz. China, Pakistan, Russia, India, Kazakhstan, Kyrgyzstan, Tajikistan and Uzbekistan. Iran, Afghanistan, Belarus and Mongolia are observer states. The SCO holds an annual summit of the council of heads of state, which is the supreme decision making body of the SCO, focused on all the key areas of the activities of including political, security, trade, economic and culture.