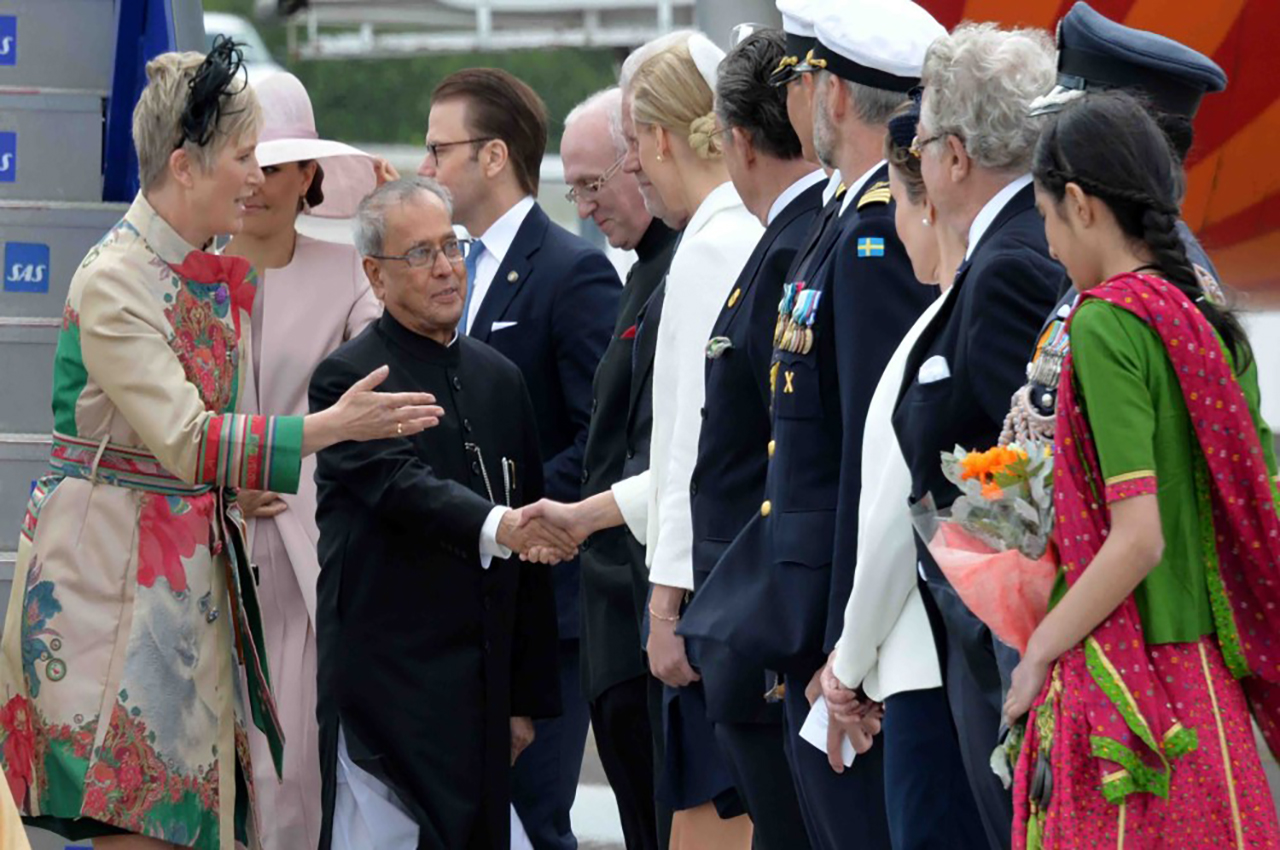 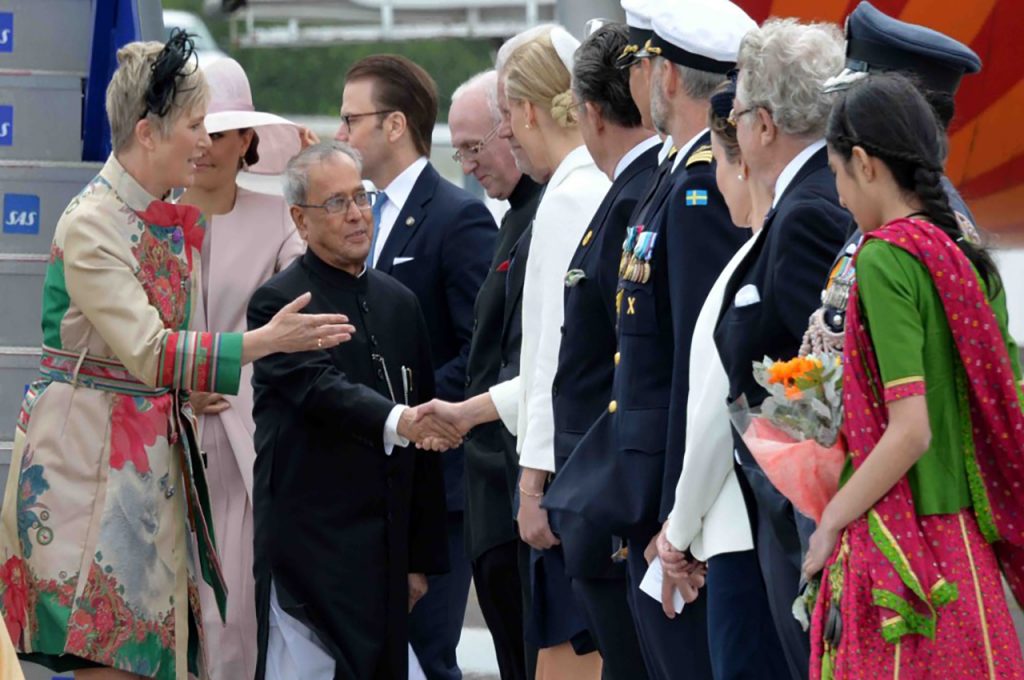 The contact between Sweden and the Indian subcontinent dates to at least the 8th century CE and the era of the Vikings. Both countries established formal diplomatic relations two years later 1949 with establishing diplomatic mission in Stockholm at the level of a legation, with the Indian head of mission holding the rank of an envoy extraordinary and minister plenipotentiary. In 1962, this mission was raised to the status of an embassy, with full ambassadorial rank. Along with the gradual development of modern contact between India and Sweden, both countries had strengthened their connection through economic cooperation.

Since the 2000s, the degree of bilateralties between the countries has consistently increased, as has the frequency of bilateral visits. Both governments have expressed their fervor to heighten their economic and cultural relations. Prime Minister of Sweden Stefan Löfven has declared his support for India’s candidature as a permanent member of the United Nations Security Council. Today, the mutual economic interests have emerged as the driver of the relationship between India and Sweden with growth in bilateral trade, which crossed $2 billion in 2009-10 and increased to $2.4 billion in 2014-15; so is the two-way investments, which are also escalating. There are complementarities in the areas of cutting edge technologies creating good potential for bilateral collaboration in key areas like green technologies, renewable energy, smart infrastructure, healthcare and defense. The landmark visit by the President of India Shri Pranab Mukherjee to Sweden from May 31 to June 2, 2015, accompanied by a large business delegation, the areas which were highlighted for future cooperation included collaboration in India’s Smart Cities programme, healthcare and innovation (Sweden is one of the world’s leading innovative nation, generally ranked among the top three according to different global indices). The president, Mukharjee had a closeddoor Round Table with CEOs of major Swedish companies and addressed a large gathering on the subject of “India-Sweden Partnership – Co-creating a Brighter Future”.The momentum and substance that had been imparted to India-Sweden relations by the visit of the President of India, was further enhanced by Prime Minister of Sweden Stefan Löfven’s visit to India on February 13-14, 2016, with the largest business delegation that he has led to any country, to participate in he ‘Make in India Week’. Prime Minister of India NarendraModi and Prime Minister Löfven, along with the Prime Minister of Finland, jointly inaugurated the Make in India Centre on February 13, 2016.

Promoting investment both countries are having understanding. Sweden and India concluded a treaty for the avoidance of double taxation and prevention of tax evasion in 1997, which was amended on October 1, 2013. Sweden and India enjoy a bilateral investment treaty for the promotion and protection of investments since 2000. India is a member of the World Trade Organization (WTO) since 1995 and is therefore party to agreements within the WTO framework. Since 2007 the EU and India are engaged in negotiations of a free trade agreement. Both country’s business & trade diplomacy have already been understanding the importance of protection of economic interest. Indian Embassy promotes Swedish industry, trade and investments, facilitates the establishment of Swedish companies in India by providing support and advice, and assists with useful contacts for companies. The Embassy also assists Swedish companies in matters regarding trade barriers.Sweden embassy at India also works close with Business Sweden, the Swedish Chamber of Commerce India (SCCI) and the Consulate General in Mumbai in the promotion of Swedish economic interests. Business Sweden, the Trade and Invest Council, facilitates for Swedish companies to reach export markets with their products by providing advisory services and skills development and by organizing events and targeted campaigns. Moreover it facilitates Indian investments to Sweden. The SCCI is an independent, non-profit organization with the mission to promote economic, social and cultural relations between Sweden and India through, inter alia, organizing seminars and networking events. Each year the Embassy of Sweden in collaboration with the SCCI conducts a survey among Swedish companies in India in order to collect information about trends, opportunities and challenges. The results of the survey are presented in the yearly publication Business Climate Survey (BCS) by the SCCI.

The Swedish business climate is known for flat organizational structures and managers who are not afraid to roll up their sleeves. Business in Sweden is constantly evolving, becoming more competitive — but always with people and the environment in mind. In contrast a majority of Swedish companies continue to identify taxation rates and regulations, import regulations and custom duties to be the weightiest happenstances for doing business in India. The Indian bureaucracy is still alleged as cumbrous and time consuming hurdles for business. Corruption remains a major issue those are shackling business development. Unavailability of skilled labor and increasing salaries are challenges related to the workforce. It is seen that there are major shift of perception on doing business climate in India by the Swedish companies. From 2013 a majority of Swedish companies assess the business and investment climate in India as more favorable. It was reported that the in 2015, 90% of the companies perceive a favorable investment climate (compared to 51% in 2013) the coming three years. Almost 60% report increased market share especially companies within Retail/Sourcing of Consumer Goods and Life Science/Healthcare. About 40% of the companies report increasing operating margins and 73% give a positive and increased revenue forecast. Proximity to market and low production cost are the main advantages for companies to manufacture in India. Despite the weakening sentiment in 2013, almost 3 out of 4 companies have invested especially into manufacturing; product development and R&D; in addition, 8 out of 10 willing companies are planning to invest further during the next three years. The Promises of India-Swedish MOUs Sweden and India have entered into a number of Memorandum of Understanding (MoU) within a wide range of areas. The MoUs are of great importance as they facilitate cooperation between the two countries in areas of mutual interest. The MoUs are valuable for public authorities as well as for companies and organizations for implementation of activities within prioritized sectors.

India is Sweden’s 19th largest export market. Now, the bilateral trade between India-Sweden stands at over $2 billion. After China and Japan, India is Sweden’s third largest trade partner in Asia. The main Swedish exports to India are communication equipment, motor vehicles, paper & pulp products, pharmaceuticals, chemicals and engineering products. The main items of Indian exports are garments, textiles, chemical products, food products, and semi manufactured and manufactured goods. The greatest share of Swedish imports from India at 92 percent consists of chemicals, manufactured goods and articles. Food, beverages and tobacco are the second most important imported items, accounting for 6 percent of total imports. Sweden’s import of crude materials and mineral funds from India accounts for 2 percent. According to the International Trade Centre figures, India’s service exports to Sweden was more than the Swedish service exports to India in 2013. Bilateral Trade has increased remarkably over the last few years .Sweden regards free trade as a driver of economic growth but at the same time Sweden shows its responsive to people or the planet through its exports. Sweden mandates and promotes corporate social responsibility to protect the rights of employees and the environment wherever it’s companies operate.

During early 20th century, several Swedish firms established branches in India, notably Ericsson, Swedish Match (WIMCO) and ASEA (now part of the ABB Group) have been in India since 1920s. Since then the other Swedish companies like Atlas Copco, Sandvik, Alfa Laval, Volvo, Astra Zeneca, SAAB, etc. have invested in India. SKF established a small branch in Kolkata in the year 1923; after Indian independence, SKF India Ltd was incorporated in 1961, establishing a bearing factory in Pune, Maharashtra two years later. Other leading Swedish MNCs such as transport solution provider Scania and the hygiene and forest products company SCA are among the more recent entrants. Retail giants IKEA and H&M have also made significant investments in India. The Swedish business community generates about 150,000 direct jobs currently and another +600,000 indirectly. This is a remarkable contribution to Indian employment, and development trajectory of Indian economics. Major hubs of Swedish companies are Delhi NCR, Bangalore, Pune and Mumbai, but 55 percent are planning to expand operations into other states within the coming 3 years, mainly Odisha, Gujarat, Maharashtra, West Bengal and AP/Telangana. According to the statistics of the DIPP, FDI inflow into India from Sweden for the period April 2000 to May 2015 is $1.1 billion, making it the 19th largest investor, accounting for 0.43 percent of total FDI inflows in the country. Sectors that have received the largest shares of Swedish investments in India are Automobile Industry (33 percent), Industrial Machinery (15 percent), Miscellaneous Mechanical & Engineering Industries (10 percent), Electrical Equipment (7 percent) and Metallurgical Industries (5 percent). Data revealed that over the last decade, Indian investment in Sweden has also increased. There are over 70 Indian companies including IT companies currently present in Sweden.There are over 40 Indian IT companies in Sweden. Indian pharma and biotech companies like Dr. Reddys, Biocon, Kemwell and Cadila Pharma have formed collaborative relations in Sweden. Bharat Forge, acquired the Swedish firm Imatra Kilsta AB in 2005 with a workforce of over 500 employees. In 2006, Wipro acquired 100% equity of the Sweden-based Hydrauto Group AB which produces hydraulic cylinders. In May, 2011 India’s Crompton Greaves acquired Emotron which develops electric motors in Helsingborg. In April, 2011 Aditya Birla Group acquired the Swedish specialty pulp maker and bio refinery company Domsjo Fabriker for SEK 2.1 billion. In July, 2012, Indian Telecom co. Altruist Technologies has purchased Swedish Telecom Company Telligent. In October 2015, Volvo Trucks had reached an agreement to divest its external IT operations to HCL Technology for a cash payment of $138 million. According to rough estimates the cumulative Indian investment in Sweden is currently in the range of $700-800 million (till June, 2015).

MoUs inked by India-Sweden are offering mutual benefits in multiple ways and strengthening and shaping cooperation of present for future relationship. 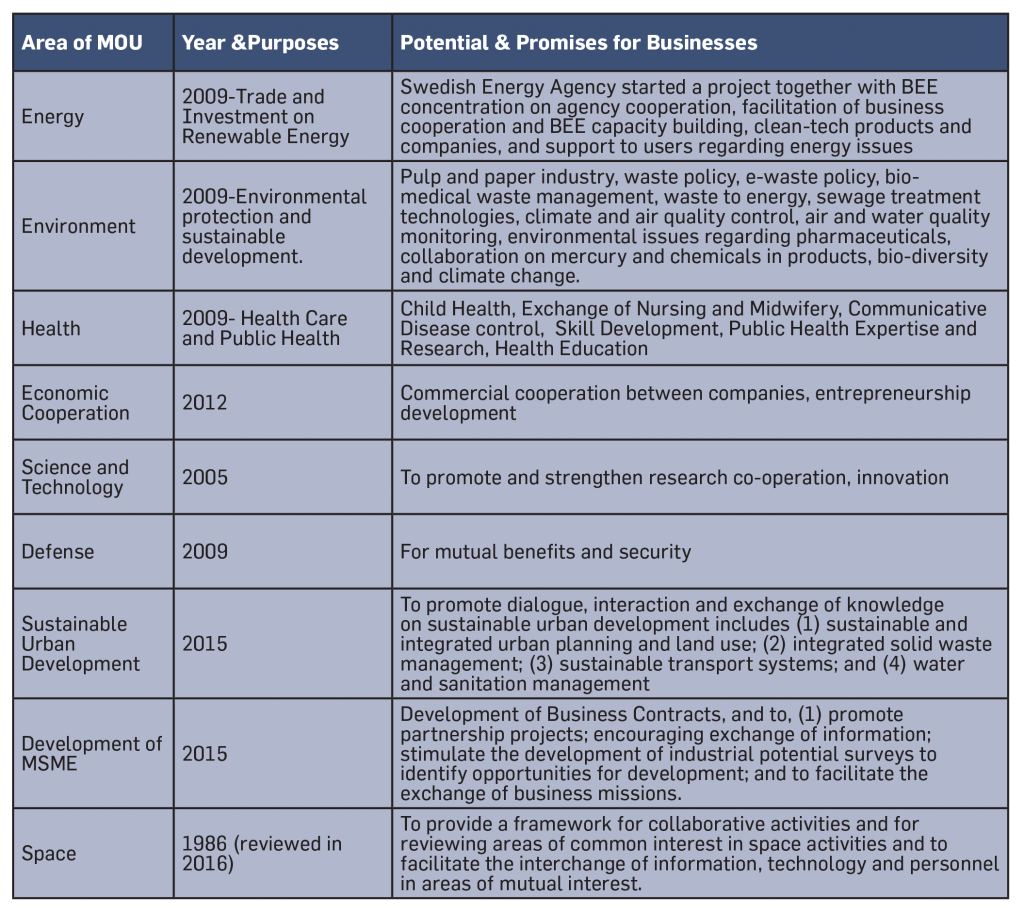 India-Swedish cooperation has gone beyond the economics and trade, or to political understanding. In the area of development cooperation Sweden is providing support through he International Training Programmes (ITPs) which are financed by the Swedish International Development Cooperation Agency (SIDA). Swedish Aid policy has not left India aside. Under Swedish Aid many programmes were conducted with a aim to enhance managerial and technical skills covering subjects of strategic importance for economic, also social development. Under the ambit of developmental cooperation, Swedish and Indian cooperation captured the development cooperation of municipalities, government agencies, universities, companies and NGOs.As Indo-Swedish relations continue to evolve, our two countries should commit to joint efforts that reflect the shared values at the heart of our strong relationship. India-Sweden cooperation history speak beyond political cooperation, it is holistic, it is complete, and it is futuristic.