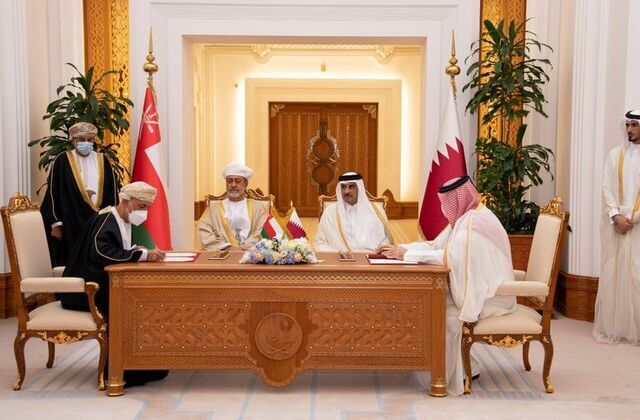 The State of Qatar and the Sultanate of Oman always had close bilateral relations. These relations were consolidated in all areas after the independence of the State of Qatar. The bilateral relations between the State of Qatar and the Sultanate of Oman are characterized by stability and growth. These relations have further deepened through mutual official visited by leaders of both countries which are followed by frequent official visits of senior officials from the Sultanate of Oman. These visits aim at promoting cooperation and strengthening the bilateral ties between the two countries. Under the directions of HH Sheikh Hamad bin Khalifa Al Thani, the ex-Emir, and HM Sultan Qaboos bin Said, the Qatari-Omani Joint Committee was established to enhance the relations. The Committee already has held fifteen meetings with the most recent meeting held in May 2010.

On 22nd November 2021, Oman and Qatar signed around six agreements in areas including military cooperation, taxation, tourism, ports, labour and investment as Oman seeks to invigorate its debt-burdened economy. The agreements were signed during a two-day state visit by Oman’s Sultan Haitham to the small but wealthy state of Qatar, one of the world’s top producers of liquefied natural gas (LNG).

Oman is one of the weakest in terms of finance in the Gulf oil producers. It has been pursuing wide-ranging reforms and austerity measures since Sultan Haitham bin Tariq Al Said took power almost two years ago following the death of his predecessor who ruled for half a century.

Since 2014, when there was an oil price crash, Oman has accumulated a large amount of debt. Things became worse when the country was hit by the pandemic. Qatar has made sure to help the country when needed. According to a 2020 October bond prospectus, Oman even asked some of the Gulf countries for financial help.