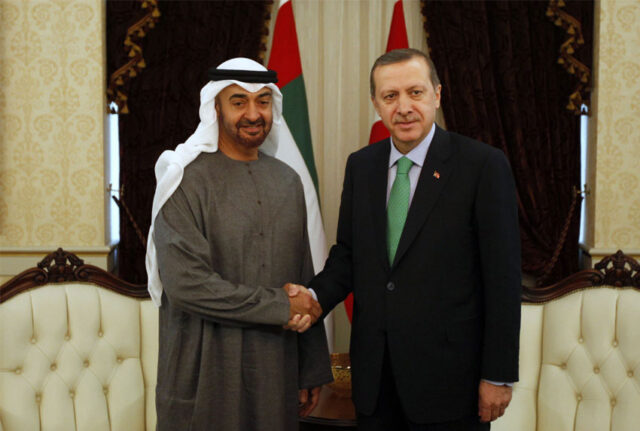 Abu Dhabi’s Crown Prince Sheikh Mohammed bin Zayed Al Nahyan is visiting Turkey on 24 November. This visit is making history of sorts as this is the highest-level visit in many years. During the trip, the Prince will meet the Turkish President Recep Tayyip Erdoğan.

The historic visit is happening following an invitation from the Turkish President.

Observers believe business will be given a priority during these talks. Any positive outcome of these talks is likely to see increased trade and development between the two countries. Unlocking trade opportunities could mean business of billions of dollars.

The two sides, according to UAE’s state news agency WAM, will focus on improving bilateral ties. The two countries have not had a warm relationship in the past decade. However, things began to change with efforts from both sides this year.

Ties were strained over the role played by Islamist groups during the Arab Spring in 2011, the two sides were supporting opposite groups in the Libyan conflict. Apart from these, UAE and Turkey have differences over oil explorations in the Eastern Mediterranean.

The Turkish Presidency had threatened to cut off diplomatic ties with the UAE after the latter had decided to normalise ties with Israel.

Before the latest talks, Prince Sheikh Mohammed and President Erdoğan had a telephonic talk in August this year. This telephonic conversation was preceded by talks between the Turkish President with UAE National Security Adviser Sheikh Tahnoun bin Zayed Al Nahyan. Among other factors, the fact that the US is stepping aside from some of the regional issues and re-engaging with Iran, might have triggered the meeting in Ankara.

Post – Pandemic, the UAE has consciously prioritised on building the economy and keeping contentious regional issues at a distance.

For Ankara, observers believe, the outreach might be to find new investors for its economy. The Turkish President has come in for criticism over his handling of the economy. Apart from UAE, Turkey has also reached out to Egypt and Saudi Arabia in the region.

Official statements released by WAM and the Turkish Presidency hint at discussion will include bilateral issues, regional and international developments.

The Turkish side is looking at the UAE for investments in the energy sector. Abu Dhabi’s sovereign wealth fund has invested in Turkish online grocer and e-commerce platforms. The two sides held business talks in Dubai on 23 November.

According to a Turkish newspaper, Abu Dhabi Investment Authority and other Emirati companies have shown keen interest in Turkey’s defence, healthcare and fintech companies.