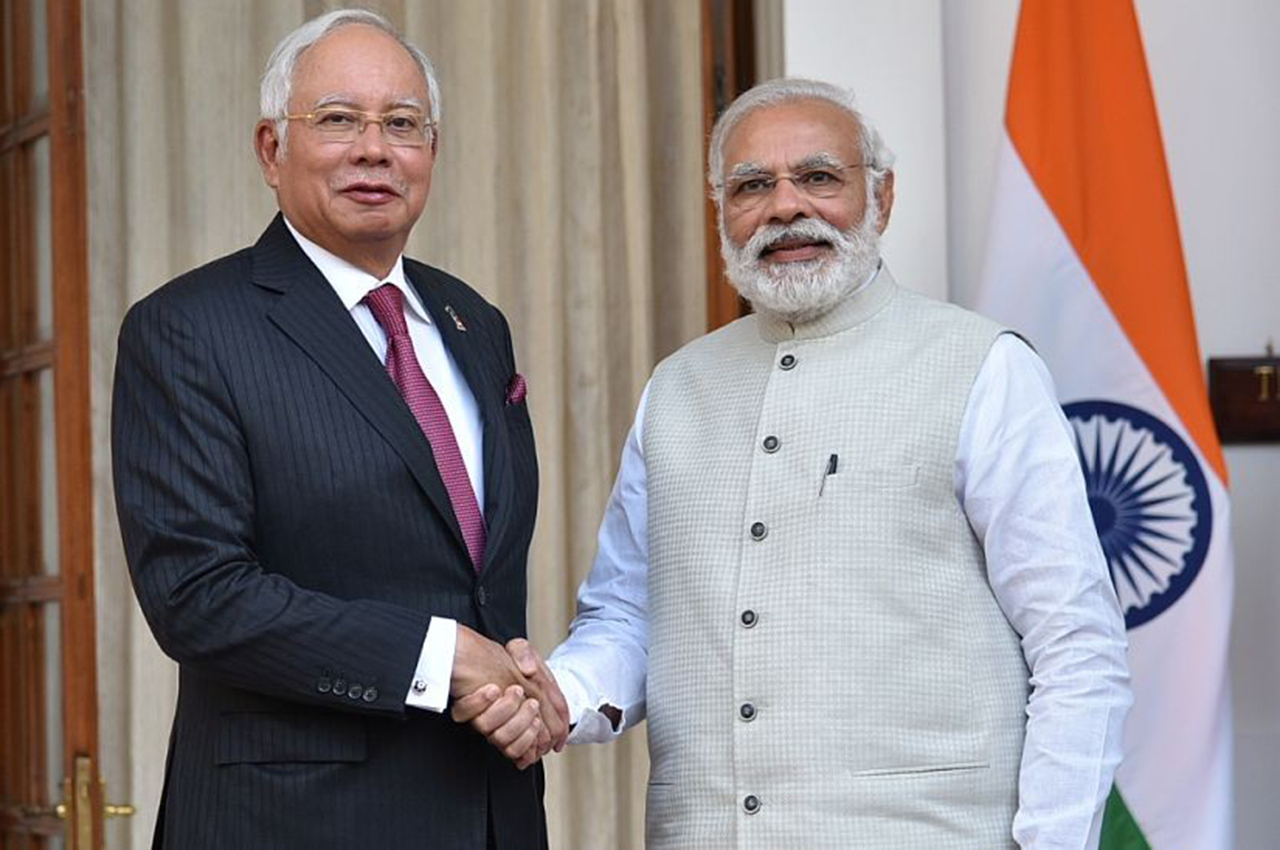 Established in 1957 and premised on deep historical, social and cultural links, Malaysia-India relations have come a long way over the last 60 years.

It is noteworthy to mention that when Malaysia (then known as the Federation of Malaya) gained independence in 1957, the country had relations with only seven countries around the world and India was one of them.

In the early years of the establishment of relations between both nations, Malaysia showed great political affinity towards India. Not only did Malaysia strongly condemn Chinese occupation of Tibet in 1959, but when the Sino-Indian war broke out, Malaysia even launched a “Save Democracy Fund”. For Malaysia, the whole episode was mainly due to China’s unprovoked aggression on India.

In fact, Malaysia even supported India during 1965 Indo-Pak war and both countries have been extremely supportive of their respective roles in the Commonwealth and Malaysia-India Sixty Years of Strategic Partnership Jatswan S. Sidhu* Non-Aligned Movement (NAM). Further, all Malaysian prime ministers since independence too have visited India on a number of occasions, either on State visits or to attend meeting of various international organisations such as the G15, NAM and CHOGM.

In fact, the current Malaysian Prime Minister, Najib Razak, visited India within the first year of taking office and has since visited India three times, namely in 2010, 2012 and 2017. Similarly, most Indian Prime Ministers too have visited Malaysia on a number of occasions and these include Jawaharlal Nehru, Indira Gandhi, Narashima Rao, Rajiv Gandhi, I K Gujral, Atal Bihari Vajpayee, Manmohan Singh and Narendra Modi.

Nonetheless, since 1991, relations with Malaysia have been given much prominence by New Delhi especially within the context of its ‘Look East Policy’ and now within the prism of its ‘Act East Policy’. As such, in October 2010 and during the visit by Indian Prime Minister Manmohan Singh to Malaysia, relations between both were upgraded to the level of a ‘strategic partnership’.

Further, in November 2015, when Prime Minister Narendra Modi visited Malaysia, relations between both were further elevated to the level of ‘enhanced strategic partnership’. In addition, both countries also signed the Malaysia-India Comprehensive Economic Cooperation Agreement (MICECA) on 24 September 2010 and which came into force on 1 July 2011. The MICECA is a comprehensive agreement which covers trade in goods, services, investments and movement of people.

Aimed at facilitating bilateral trade, investments, services and economic relations between Malaysia and India, the MICECA also value-adds to the benefits from the ASEAN-India Trade in Goods Agreement (AITIG). On the eve of its 60th anniversary, relations between both reached a historic high in April 2017 when during a six day state visit to India by the Malaysian Prime Minister Najib Razak, some 31 Memorandums of Understandings (MoUs) worth around $36 billion were signed, namely aimed at expanding the scope of cooperation between both countries.

Of this total, $32.13 billion would be implemented for projects in Malaysia while the rest, $3.6 billion, for projects in India. More importantly, both countries also agreed to revitalise the MICECA, aimed at further enhancing bilateral trade. Interestingly enough, relations between Malaysia and India are not merely confined at federal levels. In addition to relations between New Delhi and Kuala Lumpur, there are also a number of state governments in India and Malaysia that have been establishing relations with each other, mainly to lure investors. These include states like Andhra Pradesh and Telangana.

In fact, during Najib Razak’s April 2017 visit to India, one MoU was in fact inked between the Andhra Pradesh Economic Development Board and Malaysia MIGHT Technology Nurturing Sdn Bhd (MTN). Even the Malaysian state of Penang sent a delegation to Telangana in August 2016, with the aim of establishing cooperation in the high-end technology and manufacturing sectors.

Over the decades, the development of relations between Malaysia and India have greatly expanded into a number of areas such that it presently cover a broad spectrum of sectors, ranging from economic to commercial to defence and security issues. In the area of economic and commercial relations, bilateral trade has been growing steadily over the years. While total trade between both stood at a mere $600 million in 1992, by 2014-15, it had peaked to the level of $16.9 billion. Both countries are also pushing to increase bilateral trade to the level of $15 billion annually in the near future – something that is surely possible under the MICECA. For Malaysia, India is currently its tenth-largest trading partner, seventh largest export market and twelfth largest source of imports.

In fact, between 1980 and 1990 alone, a total capital investment of $234 million from India was approved by Malaysia, involving some 88 projects. In another direction, Malaysia too had invested some $400m million in India by 1990. By 2017, Malaysian investments in India stood at $7 billion thus making Malaysia India’s second largest investor from the ASEAN region.

In addition, Malaysian companies have also been actively involved in the area of infrastructure development in India, especially in more than 50 road connectivity projects worth around $2.8 billion. In another direction, India’s cumulative investment in Malaysia between 1980 and 2014 stood at $2.31 billion. Currently, at least some 115 Indian companies are operating in Malaysia, especially in the pharmaceuticals, information technology, biotechnology, automobiles, education and healthcare sectors, with total Indian investment in Malaysia standing at $2.5 billion. In fact, the world’s largest integrated polyester and textile company owned by India’s Reliance Group is located in Malaysia while Tech Mahindra is amongst many IT firms operating in Malaysia.

The tourism sector has also been of great interest between both and especially to Malaysia. India was Malaysia’s sixth largest source of tourists’ inflow in 2016 with more than 600,000 Indian tourists visiting Malaysia. Meanwhile for India, Malaysia was its tenth largest source of tourists’ inflow with some 160,000 Malaysian tourists visiting India in the same year. To facilitate this, there are also currently some 170 weekly flights between various destinations in Malaysia and India.

Both Malaysia and India have also been cooperating closely on areas concerning security and defence. In 1993, an MoU on Defence Cooperation was signed between both and also saw the formation of the Malaysia-India Defence Cooperation Meeting (MIDCOM). Since then, both countries have been working closely in the area of security and defence such that high level defence personnel meetings have been taking place on a regular basis.

It was reported that between 2008 and 2010, Indian pilots manning the Sukhois were also training Malaysia defence personnel. In fact, Malaysia and India undertook their first military exercise in 2012 known as Harimau Shakti and first naval exercise in 2016. The armed forces of both countries also participate in the annual MILAN naval exercise that also includes another 14 countries in the Indian Ocean. In addition, it is anticipated that India will play a greater role Malaysia’s defence modernization programme, especially when taking into account the MoUs that were inked in these areas in April 2016. One concerns Malaysia’s request for industrial cooperation with Hindustan Aeronautics Ltd. (HAL), while the other relates to Malaysia’s plan to develop a Malaysian Defence and Security Technology Park (MDSTP).

Apart from cooperation in the defence sector, security issues too have been figuring prominently in relations between Malaysia and India, especially in recent years. One concerns the dispute over the South China Sea which can potentially undermine freedom of navigation, especially when taking into account Chinese military activities and militarization of the area. It therefore came as no surprise when both Najib and Modi made an indirect reference to the South China Sea during the formers visit to India in April 2017 by stressing on the need for freedom of navigation and over fl ight as well as unimpeded lawful commerce based on the principles of international law and the UNCLOS 1982.

Besides the South China Sea issue, during the said visit both countries also agreed to cooperate matters related to anti-joint terrorism efforts as well as security in the Melaka Strait. In fact, Modi even commended Malaysia on its efforts to counter radicalization and terrorism.

India remains important to Malaysia for a number of reasons. For Malaysia, India has always been viewed as a trusted friend, especially so during the Cold War years and the administration of the first Malaysian Prime Minister, when the country’s foreign policy was essentially pro-West and anti-communist. Since 1991 and with rapid economic growth, the immense economic opportunities offered by India appeared to have gained prominence in Malaysian foreign policy calculation as well. More so when taking into account the “Make in India” initiative that was launched in September 2014 and one that aims at making India the top global destination for foreign direct investment. In addition, Malaysia is also home to some 2 million ethnic Indians that play an important role in people-to-people ties between both countries. Aside these, excellent infrastructure and ease of doing business has often been cited by many Indian businessmen as a major a factor that attracts Indian companies to Malaysia.

On the other hand, for India, Malaysia too is important in a number of ways. Its strategic location being smacked right in the middle of Southeast Asia and one of the world’s busiest shipping lanes – the Melaka Strait – lends credence to Malaysia’s immense geostrategic importance. In addition, besides Singapore, India views Malaysia as one of its key partners in the ASEAN region. In fact, during Modi’s visit to Malaysia in 2015, the Indian Prime Minister categorically described India’s relations with Malaysia as being at the core of its Act East Policy. Malaysia’s image of a moderate Muslim nation is probably yet another attraction for India.

Recent developments in the relations between Malaysia and India appear to suggest that both countries are now working hard to take their relations to a higher plateau. More so when taking into account that Malaysia has been looking for greater opportunities beyond the Northeast and Southeast Asian region. All the same India too has been aggressively advancing its ‘Act East Policy’ thus signifying a dramatic shift in Indian foreign policy orientation and its relations with states in Asia.

Last but not least, aside from the considerable emphasis on track-one diplomacy, Malaysia and India also need to encourage greater efforts at track-two diplomacy so as to ensure further entrenchment and consolidation of relations between both.

By: Jatswan S. Sidhu is (Ph.D.) Associate Professor at the Department of International and Strategic Studies, University of Malaya