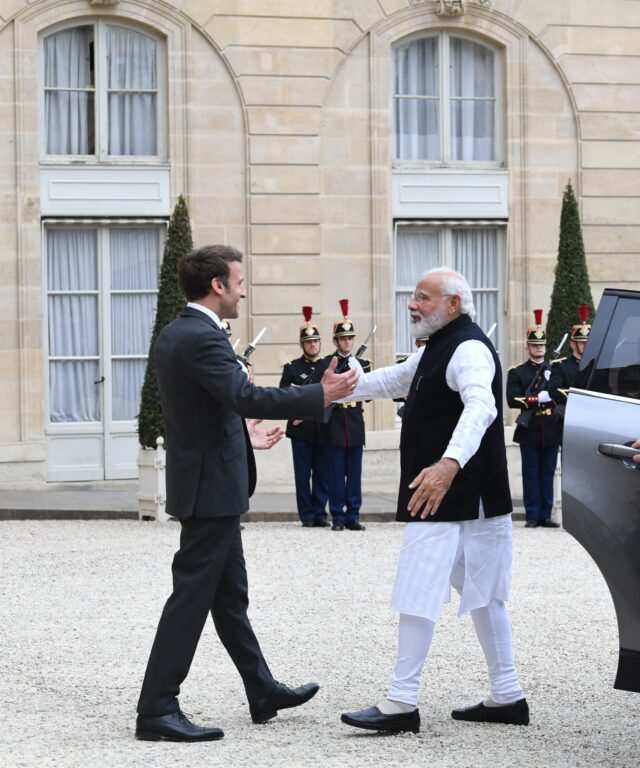 Emmanuel Macron made history by becoming the first French President to win a second term in the last two decades. Marine Le Pen, his far-right rival was defeated as Macron won over 58% of the votes. President Emmanuel Macron’s victory speech on the Champs de Mars highlighted that his new term would see continuity and intends to go back to work straight away on domestic and foreign policy. World leaders congratulated Macron on the presidential victory, among them was Indian Prime Minister Narendra Modi, expressing his willingness to deepen the India-France strategic partnership.

Guided by their mutual desire to pursue strategic autonomy, the relationship has adapted to the changing global complexities both during and after the Cold War years. Even in the face of current great power rivalry, asymmetrical power balances, and a geopolitical flux, the bilateral relationship India and France have experienced has largely witnessed an unwavering commitment to shared values. Macron’s Presidency earmarked a big leap in India-France relations, particularly in the sphere of defence trade and maritime security cooperation. However, the relationship has also seen occasional abrasion in light of the controversy surrounding the Rafale deal. While the re-election of Emmanuel Macron has come amidst a horrific war in Ukraine showing no signs of ending soon, this week’s visits by Prime Minister Narendra Modi to Berlin, Copenhagen, and Paris may provide insight into how France factors into India’s strategic future in Europe as well as its larger game plan in the Indo-Pacific.

France’s understanding of China’s hegemonic designs aligns well with New Delhi’s outreach to Europe and the Indo-Pacific. India’s immense political, economic, and demographic weight is an excellent source of potential for France which, like the US, has been attempting to develop a pivot to Asia as a counterbalance to China’s hegemony across the area. France was the first European country to launch an Indo-Pacific strategy, and since its inception, India and France have conducted joint naval exercises such as La Pérouse, widening the scope for bilateral cooperation. Key agreements have also been a testament to the degree of trust between the countries. The Joint Strategic Vision of India-France Cooperation in the Indian Ocean Region suggests the level of comfort India and France share, underpinning convergent interests spanning multiple sectors.

In recent years, India’s support of France has been crucial in uplifting a multipolar world order. Both New Delhi and Paris expressed their desire for a multilateral world and their aspirations are noticeable through their participation in multilateral and minilateral organisations. Although France has pulled out of the India-France-Australia trilateral in protest of the AUKUS deal, France will likely find new ways to work with other like-minded partners. Through the Quad Plus framework and the IORA (Indian Ocean Rim Association), India and France have deepened bilateral engagement in multilateral organisations within the Indo-Pacific.

While Indo-French ties have undoubtedly seen unprecedented growth and cooperation in the Indo-Pacific region, in light of the Ukraine crisis, India’s balancing act of appeasing both Russia and the West raises questions on whether the strategic partnership will hit a nadir. French President Emmanuel Macron spoke with Modi to discuss the issue. As France presently holds the European Union Council chair, a proactive Macron has been meeting with EU leaders and world leaders daily to de-escalate the problem. India’s decision to abstain from key U.N. votes and suspend its membership in the Human Rights Council is a significant break with long-standing European Union (EU) policy. India has called for an “immediate cessation of violence” in Ukraine but refrained from condemning Russia’s invasion and sanctions. While New Delhi’s stance adds complexity to the dynamic, French officials expressed that it fully respects India’s decision. Emmanuel Lenain, French ambassador to India stated that France would like India’s support and relayed the sentiment that France is much like India in its attachment to strategic autonomy. Although France had called on India to condemn Russia, Paris itself has taken a nuanced position. Macron kept a diplomatic line open to Russia since Moscow’s aggression against Ukraine. In March, President Macron spoke with his Russian counterpart 11 times. Macron’s push for diplomacy is reminiscent of France’s post-World War II legacy of forging its geopolitical course and refusing to tow the American line blindly. Bearing this in mind, France’s foreign policy toward India has always been characterised by understanding each other’s larger strategic ambitions. Under the Macron presidency, the Ukraine crisis has been a minor litmus test for the India-France relations. More importantly, it is imperative to understand that France is no longer alone in recognising the immense potential of fostering ties with New Delhi. The European Union’s plans to relaunch trade talks with India are indicative of China expressing its power more assertively, and both parties are realising the advantages of tighter cooperation exceeding any significant differences. Going forward, China’s increasing grip on the Indo-Pacific and the European region will provide impetus to the partnership through collaboration in defence, maritime security, and trade. As France’s objectives in the Indo-Pacific become more pronounced, its reliance on like-minded countries like India will be consequential in achieving its larger strategic ambitions.