During his visit to Israel in July last year, PM Modi and Israeli PM Netanyahu had witnessed the demonstration of sea water purification technology pioneered by Israel at a water desalination unit on the Olga Beach.

“I am thankful to Bibi (Netanyahu) because the vehicle which I saw today, particularly during a natural calamity when people are suffering (shortage of) drinking water…Can provide drinking water,” PM Modi had said after the demonstration.

GalMobile is an independent, integrated water purification vehicle, designed to produce high-quality drinking water which can be very useful in natural disasters like floods, earthquakes, military use in difficult terrain and rural areas to provide drinkable water.

The vehicle was launched in February 2015 and is the first of its kind in the world.

The goal of GalMobile is to help overcome water shortage, as well as to provide immediate drinking water assistance during a natural disaster.

Narendra Modi became the first Indian Prime Minister to visit Israel in the last 70 years. Seven agreements were signed between the two countries. It was noted that Prime Minister Modi did not visit Palestine during the trip, breaking from convention. 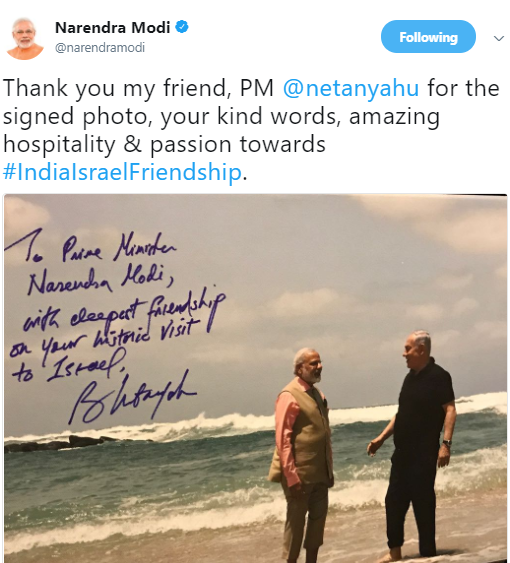 Following Prime Minister Modi’s visit to Israel in 2017, there has been an increased call for collaboration between Israel and India on innovation development. The non-profit Indian based global trade body, NASSCOM, along with the professional service company, Accenture, released the report Collaborative Innovation: The Vehicle Driving Indo-Israel Prosperity, to highlight areas of scientific and technological collaboration between the two countries.