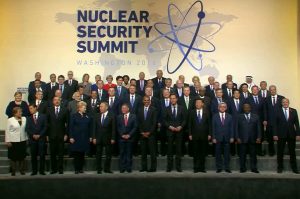 Prime Minister Narendra Modi was in the US capita, Washington DC to attend the two-day Nuclear Security Summit (NSS), March 31 to April 1, to coordinate international efforts to prevent terror organisations from acquiring nuclear weapons or material.

The summit had in attendance leaders from more than 50 countries and four international organisations — the European Union, the International Atomic Energy Agency (IAEA), the Interpol, and the UN. India circulated its national progress report on nuclear security measures at the summit.

Prime Minister Narendra Modi made key announcements while addressing the plenary session of the Nuclear Security Summit on April 1, on second and final day of the session.

Highlights Of His Announcement: