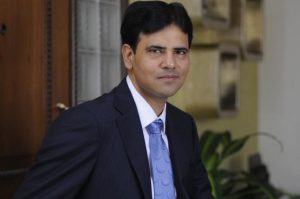 In an interview with Diplomacy & Beyond, market expert Sandip Sabharwal talks about the current global equity market scenario. He also shares his views on issues ailing domestic economy such as stressed assets in banking sector.

Sandip Sabharwal (SS): The Global markets have been volatile given the concerns around liquidity stress created by the collapose of commodities especially Crude Oil, Currency concerns as well as concerns around liquidity post Fed Hikes. Over the last two months we have seen all these concerns ebb and measures of ECB, BOJ as well as Fed indicate that liquidity will be ample globally. Commodities have also bounced above stress levels. The probability is now high that we will see a return of risk assets along with lower volatility over the next 6-12 months. Given India’s recovery potential and macro economic stability we should see markets move much higher and rally 15-20 percent over current levels.

SS: Investors should stick to their investment plans. Equities are now cheaper than what they were a year back and recovery potential better, as such equities are a good place today. Given the success in handling inflation Government Bonds should also do well and Gold should give stable returns. As such there should be proper allocation across assets. Real Estate sector will see a bit more pain driven by the actions of the Government on the cash economy as well as the Real Estate Regulation Bill. Investors should not try to speculate but just invest rightly and sit tight.

SS: The Budget and other actions of the government have put the economy on a recovery path. As commodities also stabilize we should see the investment cycle other than infrastructure also come back slowly. Overall directional things are looking positive. The passage of the Aadhaar Bill is also good to plug leakages further and cut down corruption and wasteful subsidies. Market outlook is much better than what it was six to nine months back.

SS: The PSB issue is complicated as it is something that has been allowed to linger on for too much time with the hope that things will improve. Now hope has been dropped and real action is on. This should make the banks much stronger by the end of 2016. If the economy and commodity companies show some recovery it will aid their process. The longer term and bigger issue is about governance in the banks and their ability to do proper due diligence while lending and free from political interference. This is something which we need to watch going forward. Directionally things are positive. Whether these banks can deliver bigger returns to shareholders will require more action.

SS: Sensex and Nifty should move to earlier highs by the end of this year. This will be driven by improved economic outlook, lower interest rates, a recovery in earnings growth as well as a revival in both investment and consumption demand. There is too much pessimism today and for investors that is normally the best time to invest.

SS: Macro headwinds are much greater in other EM’s. However whether India can outperform will depend on the pace and speed of earnings revival. A normal monsoon will go a long way in anchoring the recovery process. Overall we should do better than other EM’s unless there is a huge commodity rally which will shift the scales in front of India and China.

SS: The time to be worried was last year same time when Euphoria was running ahead of fundementals. Now we are in a much more healthy position and as such investors should not be much worried. The only issue is related to trading where given quick two way moves it is not really a traders market.