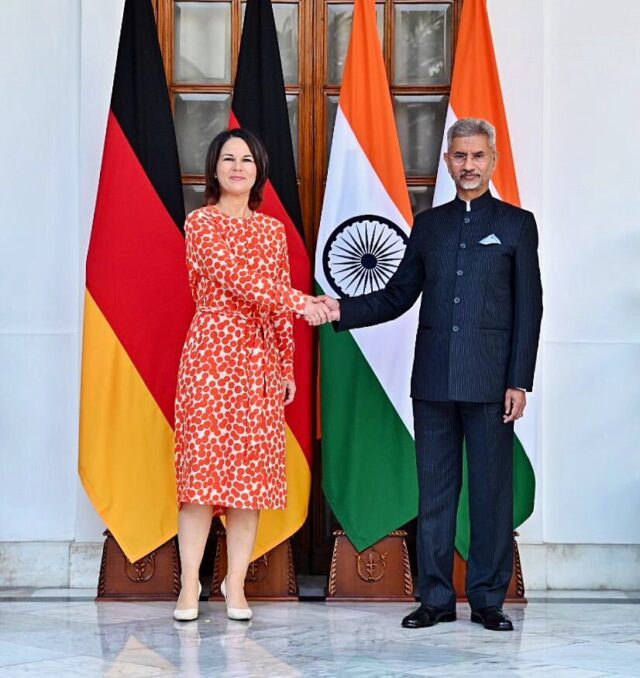 Germany and India inked a mobility partnership act on Monday, and comprehensive discussions on key global challenges were held, including the Ukraine conflict, cross-border terrorism emanating from Pakistan, and the situation in Afghanistan. At a press conference following the talks, German counterpart Annalena Baerbock and Indian Foreign Affairs Minister Dr. Jaishankar stated that the mobility pact will make it easier for people to study, conduct research, and work in each other’s countries, signalling a more modern bilateral relationship. Dr. Jaishankar also strongly defended India’s imports of crude oil from Russia and further noted that they are largely driven by market forces.

Dr. Jaishankar, in a sharp retort to a question about why India has been procuring oil from Russia, said that from February to November this year, the European Union imported more fossil fuel from Russia than the next ten countries combined.

The German Foreign Minister Annalena Baerbck arrived in Delhi for a two-day visit and discussed furthering the expansion of bilateral cooperation in a range of areas, including energy, defense, trade, security, and climate change.

Dr. Jaishankar stated at the joint media briefing that India’s position on Ukraine is clear and that this is not a time for war and that conflicts must be resolved through mutual dialogue. The German Foreign Minister also described India as a role model for many countries around the world, adding that Berlin wants to strengthen its security cooperation with New Delhi.

When Baerbock was asked about the challenges the region is facing from China, she said that there is no requirement to assess the threats while describing Beijing as a competitor and rival in many ways. She also said that they know what happens when a country becomes too dependent on another that does not share the same values.

Earlier in a statement, the German Foreign Minister described India as a “natural partner” of Germany and said that the country will have a decisive influence in shaping the international order in the 21st century. She further added that the Indian government has not only set itself ambitious goals in the G20 but also at home for its own people. India wants to push ahead with the energy transition more than before when it comes to expanding renewable energies. She also said that the dramatic consequences of the climate crisis have affected everyone, destroying livelihoods in Europe as well as in India. She stressed strengthening economic, climate, and security cooperation with India beyond their strategic partnership.