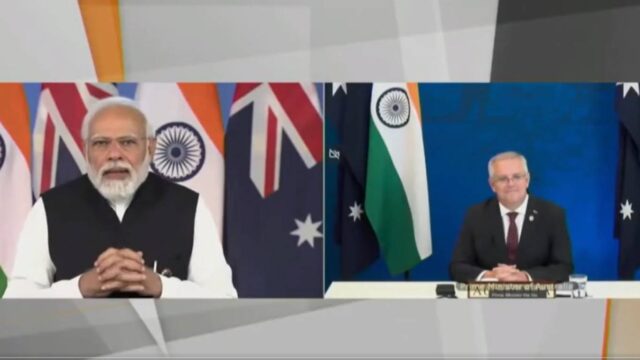 The last such summit was held in June 2020. It was around the same time when the bilateral ties were elevated to a Comprehensive Strategic Partnership.

In the latest talks, the leaders decided to host annual summits at the level of the Heads of Government under the Comprehensive Strategic Partnership.

The Australian Prime Minister’s visit to India was canceled twice in the last two years. In January 2020, Morrison’s India visit had to be canceled due to the Black Summer bushfires across Australia. His planned visit in 2021 was canceled again due to the COVID pandemic.

India and Australia signed an MoU on cooperation in the critical mining sector. It was signed by Khanij Bidesh India Ltd. (KABIL) and Australia’s Critical Mineral Facilitation Office. Foreign Secretary Harsh Vardhan Shringla said such an arrangement would help India to invest in Australia as well as get Australian expertise in the sector.

Australia and India are also in talks to finalize a proposed trade pact between the countries.

The new trade pact aims to the raise volume of goods exchanged between the countries. Both sides are working towards an “early harvest” agreement, where the signatories aim for easily achievable targets. The Comprehensive Economic Cooperation Agreement (CECA) to be announced will strengthen economic relations, economic revival, and economic security.

Both the Prime Ministers spoke about China, QUAD, Indo-Pacific region.

Indian officials proposed the integration of digital payment systems of both countries. The integration would greatly help the lakhs of the Indian community living in Australia. It would also immensely help businesses both in Australia and India.