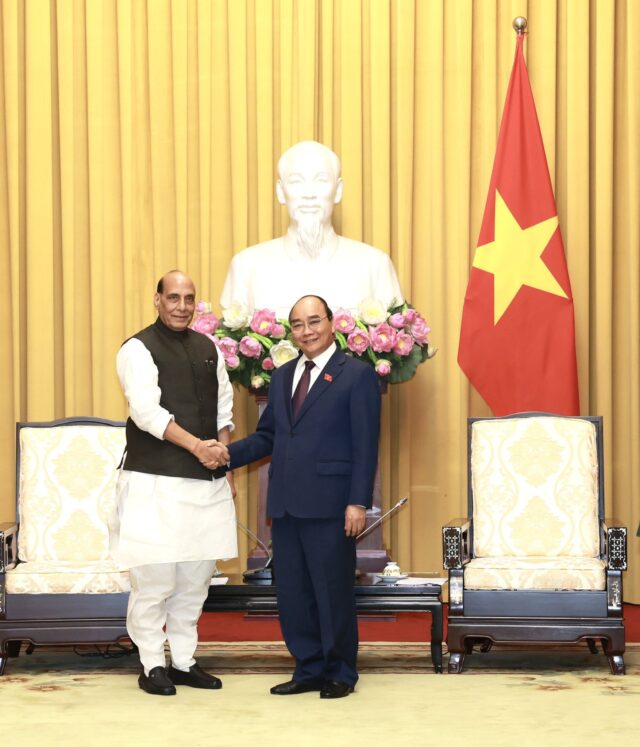 Defence Minister Rajnath Singh is on an official three-day visit from 8-10 June to Vietnam at the invitation of Vietnam’s Minister of National Defence General Phan Van Giang. India and Vietnam share a Comprehensive Strategic Partnership & their cooperation in defence is central to this partnership. On reaching Hanoi, Shri Rajnath Singh paid tribute to the Founding Father of Vietnam, President Ho Chi Minh and held bilateral talks with his counterpart, General Phan Van Giang, the Defence Minister of Vietnam. After their fruitful deliberations, they signed the “Joint Vision Statement on India-Vietnam Defence Partnership towards 2030.” This Joint Vision is expected to boost the scope and scale of India-Vietnam defence cooperation, significantly. Shri Rajnath Singh also said in a tweet, “We renewed interactions on expanding bilateral cooperation. Our close Defence and Security cooperation is an important factor of stability in the Indo-Pacific region.” Rajnath Singh and his counterpart while discussing the strategic partnership, also exchanged views on regional and global issues of mutual interest.

Shri Rajnath Singh, then called on the President of Vietnam, H.E. Nguyen Xuan Phuc. He tweeted, “India and Vietnam continue to work on the basis of remarkable convergences and deep mutual trust to develop an even stronger cooperative agenda.”

Shri Rajnath Singh also met with the Prime Minister of Vietnam H.E. Pham Minh Chinh with a focus on realising the full potential of the comprehensive strategic partnership between India and Vietnam. He tweeted, “I thank Vietnam’s Prime Minister, H.E. Pham Minh Chinh for receiving me in Hanoi. We had warm & rich discussions on realizing the full potential of India-Vietnam Comprehensive Strategic Partnership. Deeply appreciate his positive approach & focus towards deepening bilateral relations.”

On the 9th of June, Shri Rajnath Singh on his 3-day visit attended the ceremony which marks the successful completion of the project to build “12 High-Speed Guard Boats for the Vietnam Border Guard at Hong Ha Shipyard in Vietnam.” Lauding the ‘Make in India’ project, he also said that this project is a “shining example of our Make in India and Make for the World mission.”

India and Vietnam also signed a Memorandum of Understanding (MoU) on mutual logistics support. This is the first such major MoU/agreement that Vietnam has signed with any country. The defence ministry also said that India and Vietnam continue to have the “most trustworthy relations in contemporary times with broader convergence of interests and common concerns.”

“In these times of increasing cooperative engagements between the defence forces of the two countries, this (logistics pact) is a major step towards simplifying procedures for mutually beneficial logistic support and is the first such major agreement which Vietnam has signed with any country,” the ministry said in a statement.

Due to some territorial disputes that Vietnam has had with China in the South China Sea region, in the last few years, India and Vietnam have been boosting their maritime security cooperation to protect their common interests. Vietnam is a significant partner in India’s Act East policy & Indo-Pacific vision.