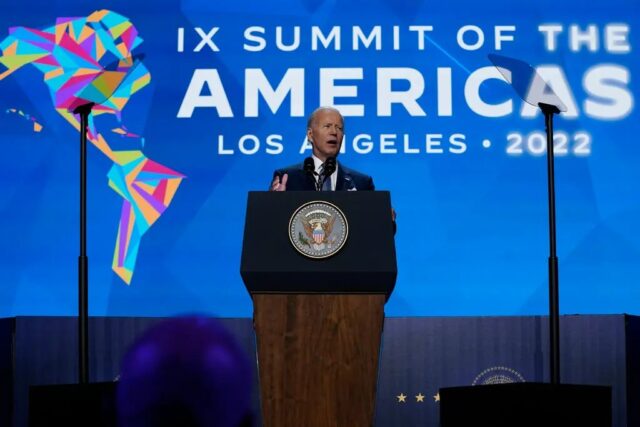 ‘Summit of the Americas’ is an international conference that takes place about every three years and brings together representatives from countries in the Western Hemisphere to counter issues such as immigration, trade and poverty. This year, it is being held from the 6th of June to the 10th of June in Los Angeles. The theme of this year’s summit is “Building a Sustainable, Resilient, and Equitable Future.” The United States is the Chair of the Ninth Summit process, thus, as the Chair, it is putting in progressive efforts with governments and stakeholders across the region to address the challenges through the Summit Process.

The United States has portrayed an inclusivity process that incorporates input from people and institutions of varied ethnic and linguistic backgrounds and also from the indigenous and other historically marginalised voices. This inclusivity in variety is symbolical of the immense diversity of the hemisphere.

Along with the Leaders’ Summit hosted by President Joe Biden, the United States Department of State is also looking forward to hosting three official stakeholder forums at the Summit:

Each forum will cater to the dialogue between the heads of government and the people and firms of the Americas by addressing challenges faced by the hemisphere and discussing opportunities which will include “social inclusion, economic recovery, climate change, democracy, digital transformation, and democracy.”

The Summit of the Americas brings the Caribbean and the countries of North, South and Central America, together. The Summit and its stakeholder forums are highly significant as they promote bilateral cooperation region-wide and all-inclusive economic growth.

The President of the United States, Mr. Joe Biden formally inaugurated the ‘Summit of the Americas’ in Los Angeles on Wednesday, 8th of June by declaring democracy a “hallmark” of their region. In his fifteen-minute inaugural speech, Biden also remarked that “in a moment when democracy is under assault around the world, let us unite again and renew our conviction that democracy is not only the defining feature of American histories but the essential ingredient to Americas’ futures.”

Prior to giving the inaugural speech the President and First Lady, Jill Biden met and greeted more than 20 heads of state from the Western Hemisphere, including Brazil, Canada and Argentina. Vice President Kamala Harris also spoke with the leaders of the Caribbean at the Summit of the Americas. She emphasised that “strengthening the U.S.-Caribbean partnership is a priority for [her] and [their] entire Administration.”

Biden has also announced the launch of a new America Health Corps which will give training to about 500,000 public health and medical professionals in the area, as well as fresh cooperation among the largest exporters of food in the hemisphere, the U.S., Argentina, Brazil, Canada, Chile and Mexico. This cooperation aims at increasing food production for export and fertiliser production for transportation.