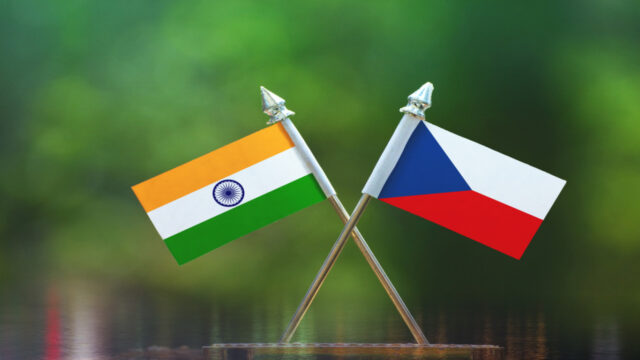 The landlocked European nation, the Czech Republic, and the South Asian giant, India share a noteworthy relation. Even though the Czech Republic is younger than India, erstwhile Czechoslovakia shared warm and usual relations with importance to trade and culture with British India and then with the Republic of India. However, the current global order and the events occurring demands both the countries to elevate their warm bilateral relationship to a strategic partnership which can help both the countries to grow and develop, despite the geographical boundaries.

HISTORY OF RELATIONS AND CO-OPERATION

Trade relations between the Kingdom of Bohemia (which accommodated major parts of the Czech Republic) and the Indian sub-continent can be traced back to the 9th and 10th Centuries AD when Indian spices reached the region via the maritime trade route and the silk road. The trade (which enhanced with the colonization of the Indian sub-continent) was the root of cultural exchange between the two regions. Hence the bohemian lifestyle can be seen deeply influenced by Indian culture and lifestyle.

The bilateral relation between former Czechoslovakia-India and even between Austro-Hungarian and Indian Sub-continent was anchored by important visits by scholars and important personalities between both the countries. The Chair of Sanskrit was established at the Charles University of Prague, the second oldest university in Central Europe in the 19th Century. This exchange of scholars, journalists, artists, traders, and businessmen was important for the exchange of ideas and cultures. During the first half of the 20th century, an important aspect of the relationship was the opening of Czechoslovakian consulates at Bombay in 1920 and later in Calcutta. Furthermore, the foremost Consul to Bombay was an Indologist, Dr. Otakar Pertold.

The most significant moment which marked a new chapter not only in books of trade but also regarding the lifestyle of Indians was the establishment of Batanagar (a township near Calcutta whose origin lies in Bata initiating its operations in the region) by Czech Bata Works. Bata has not only been an important footwear company but also has been able to understand the Indian market and consumer behaviour as well as has a special place in Indian society. In 1973 the company went public as Bata India Limited. As of now, Bata has around 1200 retail stores in metropolitan cities.

Before the independence of India, visits of two important personalities can be noted in pages of history, marking intra-personal relations of mutual trust and respect between the two countries. Before World War II, two visits of Rabindranath Tagore, in 1921 and 1926 had a deep influence important personalities of Czechoslovakia. Composer Leos Janacek had converted a story from The Gardner (a book from Tagore) into music for his violin concerto in the 1920s. ‘Harmonious voice of East’ was the title given to Tagore by Czech writer, Karel Čapek.

Netaji Subhash Chandra Bose had visited Prague and was responsible for the foundation of the ‘India-Czech Association’ back in 1934 and this organization had raised a tricolour flag with Charkha on it, symbolizing the importance of freedom movements outside the territory of India. Moreover, Netaji Bose had met Edvard Benes (former Foreign Minister and President of Czechoslovakia before the German occupation) on several occasions.

During the Cold War, along with the Soviet Union, India had certain defense relations with Eastern Bloc as well. Procurement of light weapons, tanks, heavy machine tools from Czechoslovakia and Hungary can be traced (Prabhu, 2015).

After the 1962 Sino-Indian conflict, the Communist Party of India (CPI) witnessed a division within the party, namely the Communist Party of India (Marxist) which was pro-China despite its predecessor having pro-Soviet leanings. The Prague Spring of 1968 and the subsequent occupation of Czechoslovakia by the Soviet Union (along with other countries of Warsaw Pact) in 1968 was an important move in Central Europe which certainly added ideological differences with Left Parties and subsequently resulted in the second split in 1969. When India abstained to vote on this matter and did not condemn USSR for its occupation, then Prime Minister (PM) of India, Mrs. Indira Gandhi faced criticism not only in the Parliament of India, where slogans of “Long Live Czechoslovakia!” and “Long Live Dubcek!” (the President of Czechoslovakia whose liberal and democratic policies caused Soviet occupation) were raised also by American newspapers.

Since 1993, high diplomatic visits between the two countries have driven the bilateral co-operation. Over the years, the two countries have had multiple visits between them in order to strengthen their relationship. In February 1994, when President Vaclav Havel visited India, he was conferred with Indira Gandhi Peace Award, and then in 2005, he was conferred with Mahatma Gandhi Peace Award. In 2018, after a gap of 22 years, the President of India, Ram Nath Kovind,  visited the Czech Republic which resulted in 8 Memorandum of Understanding being agreed upon between the two countries. This visit resulted in an upward trajectory for co-operation and initiated an incubation period for the strategic partnership between the Czech Republic and India. 8 MoUs on defense, trade, visa waiver for diplomats, science and technology, culture, and education.

In January 2019, Prime Minister Andrej Babiš paid an official visit to participate in the Vibrant Gujarat Summit. Foreign Minister Tomáš Petříček participated in the Raisina Dialogue, organized by Observer Research Foundation in January 2020 with conducting bilateral meetings during his visits. This visit was notable as it highlighted the importance of Think Tanks and people to people forums and their role in foreign policy.

Trade and commercial relations are the avenues of utmost significance. Since 2013, India has experienced a trade surplus with the Czech Republic, which implies more exports than imports. In 2019, the bilateral trade between the two countries reached US$ 1.5 billion, with Indian exports valuing up to US$ 918 million and imports US$ 649 million. Both the countries have agreed to reach the US$ 5 billion mark by 2020.

One of the most important projects which has the potential to elevate commercial relations would be the Czech Industrial Cluster in Bengaluru, which was agreed upon in 2018. In September 2020, a virtual round table was conducted by the Czech Government and the State Government of Karnataka to further discuss the project along with the participation of companies from both the countries.

THE 11TH SESSION OF JOINT COMMITTEE ON ECONOMIC CO-OPERATION

The 6th session of JWG on Heavy Engineering was conducted in Brno, October 2019. The 11th Session of JCEC was conducted in Prague, October 2018. The 11th session can be attributed with paramount importance because of the joint protocol agreed upon between the counterparts covering broad topics such as trade, investment, defense, engineering, science and technology, culture, India-EU-BTIA, etc.

The most prominent aspect which binds the Czech Republic and Republic of India is their adherence to democracy and parliamentary form of government. Moreover, both countries have gone through the freedom struggle. While India used non-violence as the most important tool for their quest for Independence, the Czech Republic in 1989 separated from Czechoslovakia through a non-violent transition of power, popularly called the ‘Velvet Revolution’. Since their independence, both countries have focused on democratic values, human rights, freedom, and fairness.

Since 1947, India has been an advocate of rule-based International Order. The Czech Foreign Minister Tomáš Petříček highlighted how with convergence on these values, naturally both the countries can become partners in a multipolar world order where no single country could dominate public service goods and security. Moreover, Czech is one of the trusted supporters of India’s membership in the Nuclear Suppliers Group and the United Nations Security Council.

During the eleventh session of JCEC, both the countries reiterated their support to India-EU Broad-based Trade and Investment Agreement (BTIA) which is important for the India-EU Free Trade Agreement negotiations.

Even though trade and commerce between the two countries are at an upward trajectory, both countries need to enhance their defense relations. Until now, the Joint Defence Committee is an important bilateral mechanism that bolsters defense relations. The 6th session of JDC was conducted in February 2020. Among the 8 MoUs signed in September 2018, one of the agreement was between Tatra Trucks (Czech) and Bharat Earth Movers Limited (BEML) was signed, regarding ‘Strategic Co-operation’. Tatra Trucks is the largest Czech supplier to the Indian Armed forces and BEML is a defense Public Sector Unit in India. Additionally, Czech Defence companies have actively participated in defense trade fairs:

February 2019: Aero India, Bengaluru where the delegation was led by the Czech Defence Minister Lubomír Metnar

RIFT BETWEEN PRAGUE AND BEIJING

The ongoing rift between Prague and Beijing can prove to be the much-needed catalyst for the Indo-Czech strategic partnership. The contours of conflict emerged when President Miloš Zeman decided to skip the ‘17+1 Summit’ the Chinese initiative to bolster China-Central and Eastern European relations. Announced in 2012, this initiative is observing a trust deficit within itself. One of the major reasons why President Zeman took such a decision was due to the lack of investments which Beijing had promised earlier. Even though Czechia is part of the Belt and Road Initiative (BRI), in a virtual conference of BRI, only three of 17+1 countries participated, namely Serbia, Greece, and Hungary.

Other than trade and commerce, arts and culture, and education,  both the countries can co-operate and converge on outer space missions, 5G Technology, Medical Diplomacy, Cyber Security, Civil Nuclear Co-operation, Information Technology Hubs, etc. Moreover, military exercises between the armed forces of the two nations would provide a fulcrum to the strategic partnership.

potential in space activities and research.

Certainly, Indo-Czech relations are defined by historical linkages, trade, and commerce, investment opportunities, etc. However, for the past two years, with increased diplomatic visits, both countries are aiming to converge on various avenues as well. With the current rift between CEE and China, India can certainly play an important role to engage in the region. Robust relations with Prague would prove to be a gateway not only for India – EU partnership but also for India- Central Europe partnership.