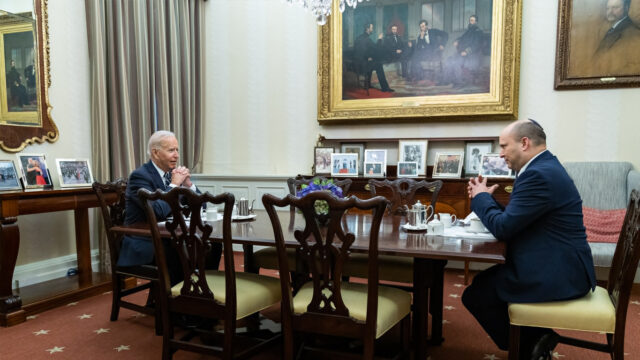 American President Joe Biden met with the Israeli Prime Minister Naftali Bennett on Friday to rekindle the strained relationship between the two countries. President Biden said that the meeting strengthened the “enduring relationship “between the two nations. He also said that the conversations “underscored the United State’s unwavering commitment to Israel’s security”.

The meeting was postponed by a day in light of the bombings at the Kabul airport in Afghanistan. Israeli Prime Minister shared his grief about the accident. Amongst other things, Iran has been on the minds of both the countries and was the main issue of discussion. At the meeting, President Biden showed a leap of faith and ensured Prime Minister Bennett of resorting to alternate ways if nuclear diplomacy failed with Iran. This came as a relief to the Israeli Prime Minister who acknowledged his happiness after the exchange. He said that he looked forward to work with President Biden for many years ahead.

Before the speculated meeting between the two leaders, Prime Minister Bennett met the Defense Secretary of the United States Lloyd Austin last week and discussed the issues that he wished to bring on the table. Amongst the main areas touched upon were the regional diplomatic and security issues, climate change, policies towards Palestine and most importantly the Iranian nuclear programme. The relationship between the two countries hit a rough terrain due to the difference of opinions between the former Prime Minister of Israel and the democratic administration in the US. At that time, Joe Biden was the Vice President under the government led by Barack Obama.

Prime Minister Bennett also met with the US Secretary of State Anthony Blinken to discuss ways of taking the relationship forward. Both shared a concern for the Iranian behaviour in the regional as well as global politics. The nuclear programme of Iran is a source of worry for both the countries. Prime Minister Bennett sees it as a threat to Israel and look forward to “work together in cooperation and goodwill” and “find common things”. He said one of those things that was important was to “fend off and curtail Iran’s pursuit to dominate the region and its race to a nuclear weapon”.

America has been trying to bring the Iranian leaders to agree upon some basic measures to follow in line with the International non-proliferation norms. It is the fate of the Iranian nuclear deal that is the cause of apprehension between the US and Israel. Israel wishes to convince the US to call it off. The Carnegie Endowment for International Peace reported that US President Biden indicated his insecurity about Iranian nuclear programme but was sure of his belief in nuclear diplomacy.

Israel and the US are allies however there have been some disagreements about issues in the recent past. This meeting will pave a way for the two countries to further mutual interests and support each other in light of the changing global dynamics.

Iran continues to dominate the political discourses. The American tactics in dealing with Iran have been scrutinised for some time now. Many countries have described the US being soft on Iran. Biden’s clear statement about opting for other means if diplomacy failed opens new avenues and will be welcomed by many other countries as well. Israel and US have a history of political, economic and defence cooperation. This meeting was another step to promote the same.