New Delhi: External affairs minister (EAM) Sushma Swaraj confirmed the deaths of the 39 missing Indians who had been kidnapped in 2014 by ISIS in Iraq.

Out of the 39 missing Indians, until now DNAs of a total of 38 human remains have matched with the DNAs obtained from the blood samples of the relatives from the States of Punjab, Himachal Pradesh, Bihar and West Bengal handed over by the GoI to the Iraqi Forensics Department. The process in the case of remaining one individual is underway.

Indian construction workers were kidnapped by Islamic State (IS) militants in Mosul city three years ago and their bodies were recently found buried in a mound of earth near Badush, a village northwest of Mosul.

The bodies were recovered from a mass grave and DNA tests confirmed that they were the missing construction workers who went missing from the Iraqi city of Mosul, Foreign Minister Sushma Swaraj told parliament.

The mortal remains will be brought back to India on a special plane and handed over to their relatives, she said.

“It may take up to 10 days to bring back the bodies of all 39 Indians killed in Iraq as there will be legal processes involved,” Minister of State for External Affairs V K Singh said.

Iraqi authorities used radar to establish that the mound was a mass grave, she said, and exhumed the bodies.

Of the 40 men, Harjit Masih from Gurdaspur, Punjab managed to escape by faking his identity as a Muslim from Bangladesh. Masih claimed to have witnessed the massacre of the others but the government rejected his version.

Countering this claim, Swaraj at the time said, “We have information from six different sources that the 39 Indians kidnapped in Iraq in June have not been killed… It is my responsibility to continue with the search on the basis of statements of these 6 sources.”

Most of the workers were from Punjab. Chief Minister of Punjab Amarinder Singh claimed that the government had known of the deaths before. 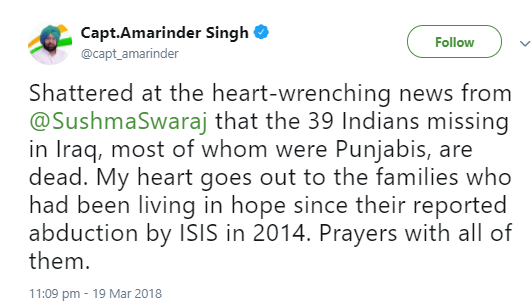 “Shattered at the heart-wrenching news … that the 39 Indians missing in Iraq, most of whom were Punjabis, are dead,” Punjab Chief Minister Amarinder Singh said on Twitter.

“My heart goes out to the families who had been living in hope since their reported abduction by ISIS in 2014.”

The government had maintained for years that it believed the men were alive and it was trying to secure their release.

The Congress accused the government of giving false hope to the Indians’ families and misleading the nation. Last year, Swaraj had told parliament that “it’s a sin” to presume the 39 Indians missing in Iraq are dead.

The family of the workers said the government had kept them in the dark. 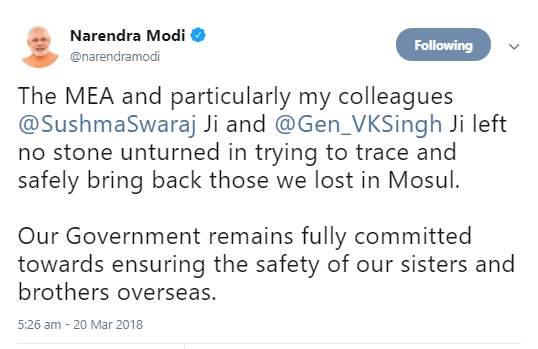 Prime Minister Narendra Modi expressed grief over the death of 39 Indians in Mosul. “Every Indian grieves with those who lost their loved ones in Mosul. We stand in solidarity with the bereaved families and pay our respects to the Indians killed in Mosul,” he said.

ISIL and Sunni militants attacked Mosul on 9 June 2014, causing heavy fighting overnight. Iraqi Army soldiers fled the city while it was under attack, allowing the militants to control much of Mosul by midday on 10 June. The militants seized numerous facilities, including Mosul International Airport, which had served as a hub for the U.S. military in the region.