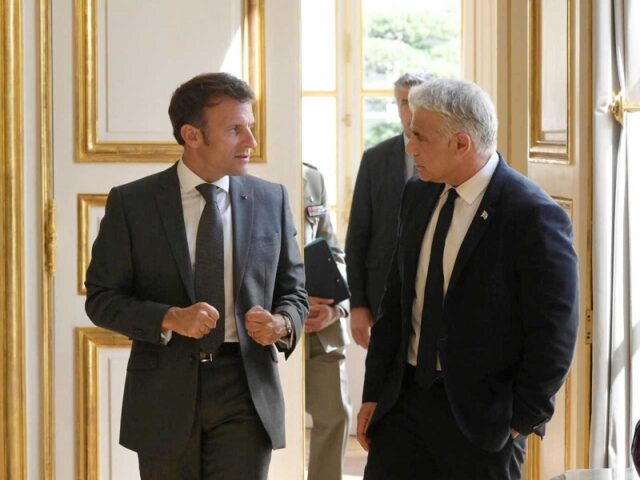 Israel’s Prime Minister Yair Lapid visited France on his first foreign visit as the PM on the 5th of July, Tuesday. This was Mr. Lapid’s first official visit to Europe. During his day-long visit to Paris, Lapid and Macron held talks towards establishing the anticipation of peace with the Palestinians and the French President Macron remarked that the Israelis were “lucky” to have a Prime Minister like Mr. Yair Lapid.

Yair Lapid urged President Macron to ponder on the Iran nuclear deal. He said that the current situation might lead to a nuclear arms race in the Middle East and will eventually threaten world peace. The remarks were made in a joint press conference on Iran’s nuclear deal and Hezbollah’s threats to Israel’s security. Israel has very recently averted Hezbollah drones which were supposedly coming to the Karish oil field.

Emmanuel Macron also suggested that the bilateral relations between Arab countries and Israel must be normalised by seeking a mutual solution to the Palestine question. Macron said about the Iran Nuclear Deal, “I would like to remind you once again of our desire to conclude the negotiations on a return to compliance with the JCPOA as soon as possible,” He further added, “We must defend this agreement,” “with even negotiations on ballistic and regional activity.”

The affinity between the two leaders has been a decade old since Macron was the Economic Minister of France and Lapid was the Finance Minister of Israel. The two leaders have similar views on “strengthening entrepreneurship, innovation and technology, and the ability of young people to break boundaries.”

Both President Macron, as well as PM Lapid, hoped for an enhancement in their bilateral ties and both looked forward to working together which will benefit both countries.

Concluding his diplomatic meeting with President Macron, PM Lapid also met with the Head of the Jewish community in France, the new President of CRIF, Yonathan Arfi. The Prime Minister wished success to Arfi for his new role. The two also discussed Israel-France relations as well as the significance of maintaining strong ties between the State of Israel and Jewish communities all around the world. Further, the Prime Minister also emphasised the importance of the fight against anti-Semitism.