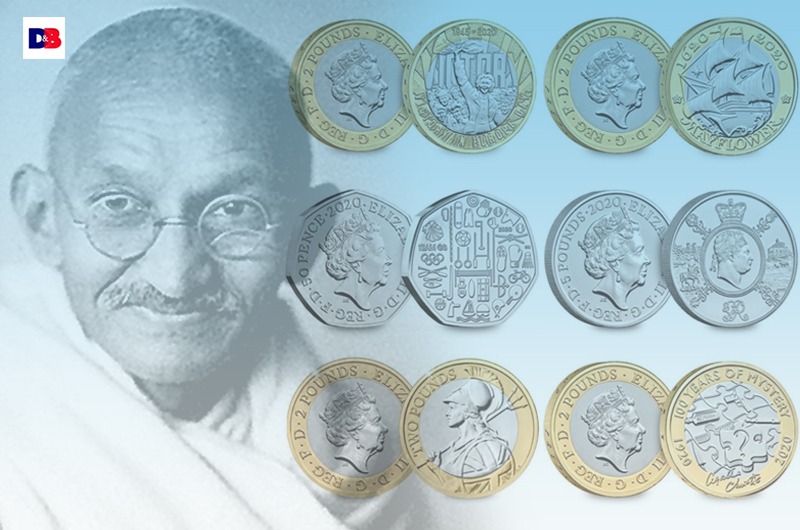 Recently the UK has shown an interest in minting a coin in order to commemorate and honour the father of the nation Mahatma Gandhi. In the wake of the brutal murder of George Floyd in the United States of America as a result of police brutality, the world has become more cognizant to issues of people from different ethnicities and racial backgrounds. In consideration of the same, as per the Finance Minister of the UK, Britain has recognised the need for acknowledgement of the monumental contributions of people of colour around the globe.

In furtherance of the same sentiment, the British Finance Minister, Rishi Sunak wrote to the Royal Mint Advisory Committee (RMAC) to consider featuring valuable contributors of the Black, Asian and other Minority Ethnic (BAME) communities on Britain’s coinage. This committee comprises experts who suggest themes and designs for British coins. As a part of the ‘We too Built Britain’ campaign supported by RMAC, the voice for representation of the revered non-white luminaries on British currency has been upsurging.

In a letter to Zehra Zaidi, an advisory board member of the Conservative Candidates Network, the UK’s Finance Minister ascertained that “Black, Asian and other ethnic minority communities have made a profound contribution to the shared history of the UK.”

UK’s deliberation to release a coin in commemoration of Mahatma Gandhi is a part of an endeavour to memorialize the accomplishments of people from the BAME communities. In a response to the Finance Ministry’s letter, the British Treasury said, “RMAC is currently considering a coin to commemorate Gandhi”.  This will make Gandhi the first non white person to be on British Currency.

The world was shaken to the core when images and videos of a Minneapolis police officer kneeling on the neck of a black man named George Floyd for nearly 9 minutes, resulting in the man’s death, surfaced on May 25 this year. The death of George Floyd has resulted in jolting the British institutions of their deep slumber, pushing  them to re-examine their own past which is replete with history of racism as a part of British imperialism and colonialism.

The Black Lives Matter protest, originally founded in 2013 in the wake of Trayvon Martin murder case, gained imense popularity as a non-violent civil disobedience movement this year. People all around the globe condemned police barbarity and raised an outcry against the racially stimulated vehemence directed towards the African-American population.

Gandhi ji’s birthday, October 2, is observed as the International Day of non-violence all around the world. His landmark Satyagraha movement, the non-violent march against institutional violence of the colonisers, is etched in history as one of the greatest mass movements carried out non-violently against an oppressive totalitarian regime. Civil disobedience movement that Gandhi spearheaded, forms the cornerstone of India’s struggle for freedom.

The United Kingdom government wants to commemorate Mahatma Gandhi for his tireless efforts and contribution to the national struggle of freedom in India as well as the far-reaching impact of Gandhian ideology and philosophy of nonviolence on the world. The Royal Mint Advisory Committee informed The Daily Mail that they have already initiated work on the commemorative coin.