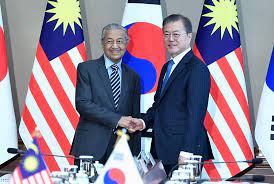 The governments of South Korea and Malaysia have recently engaged in discussions to upgrade the existing bilateral relations to strategic collaboration between them. South Korea’s Ambassador to Malaysia, Lee Chi Beom, stated that the establishment of the cooperation is beyond a mere declaration. It lays out the setting and direction for more potential cooperative spheres that cover economic, political, regional, cultural, and international dimensions. This will mark a new momentum to bolster the existing strong bilateral relations between South Korea and Malaysia. Mr. Lee states that after the principles to elevate bilateral ties to a strategic partnership were agreed upon in November 2019, both nations are now discussing the draught agreement. With further elaboration, Mr. Lee said that along with the upgradation of cooperation, it becomes important to explore and expand the sectors of collaboration, especially in some new areas like health care, artificial intelligence (AI), digital, and the halal industry. Moreover, he adds that South Korea has seen the global health sector continue to grow, and economic digitalization has been rapidly accelerating due to the pandemic, and these are areas of huge potential for both nations. In addition to this, there are continuing efforts to strengthen mutual understanding between the people and promote friendship between South Korea and Malaysia. The foundation of the bilateral relationship between the two nations can be further solidified as there are continuing efforts to reinforce mutual understanding through various public diplomacy initiatives and cultural engagements.

Mr. Lee highlighted that throughout his three-year tenure in Malaysia as a South Korean Ambassador, he witnessed an undeniable fact of the ‘Korean Wave’ in Malaysia that has played a significant role in fostering mutual understanding in the people-to-people context. In order to further promote cultural exchange, the government of South Korea is looking to possibly set up a Korean Cultural Center when the need arises. The positive effect of the Korean wave is not limited to the cultural dimension. The popularity of K dramas, cinema, and music has extended beyond the entertainment industry, including other aspects of Korean food, language, study, travel, and various other spheres that are attracting interest. Unlike other cultural flows, which are often considered a one-way surge that only exports content to overseas markets, the Korean wave is unique on its own as it grew and came far enough based on two-way interactions. The popularity of the Korean wave is because of the two-way interaction among global fans, including the fans of Malaysia, which is having a positive impact on both nations.

Mr. Lee has stated that South Korea and Malaysia could work together to address global issues such as regional growth and security, as well as supply chain issues. Lastly, he stated that as both nations work hand in hand on these particular fronts, they could not only be leaders in the regions but also discover new spheres and strategies of cooperation.