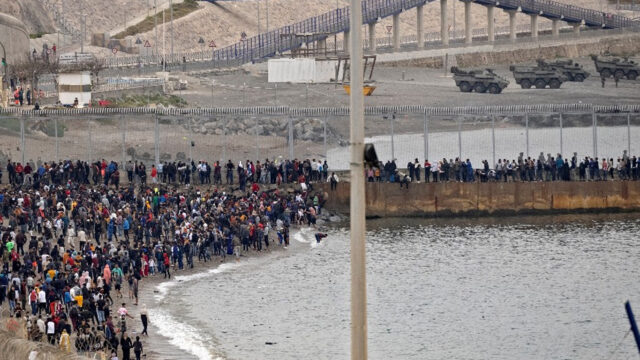 Spain and Morocco have been on strained terms after the Spanish government decided to give entry to Brahim Ghali, the man leading the freedom movement in Western Sahara against Morocco. He leads the Polisario Front and was hospitalised in Spain after testing positive for COVID 19. Spain justified the decision on humanitarian grounds and the whereabouts of Ghali were not disclosed. This was taken lightly by Morocco and the government had warned of consequences due its inconsistency with the “spirit of partnership and good neighbourliness”

In this context, the sudden crisis at Ceuta, came as a source of concern to the government of Spain. BBC reported that more than 6000 migrants reached Ceuta from Morocco setting a record for the highest number ever. It must be noted that troops have been deployed at the beach  at Tarajal, which is the main point of entry in Ceuta to help the border police in containing the illegal immigration. Earlier, forces from Morocco too helped in keeping a check. However, it is alleged that due to the political heat between the two countries, the Moroccan border guards watched as the Spanish migrants crossed the sea. The usually strict measures and militarisation at the coast by the Moroccan government was relaxed.

Spain’s Prime Minister Pedro Sanchez addressed the situation by cancelling his trip to Paris and described as a serious problem. He also stated that anyone who entered Ceuta and Melilla illegally was to be sent back. In fact around 3000 migrants were sent back. Due to the massive influx, there is a sudden uneasiness and fear in the region. While the government has sent many back, some migrants were allowed under humanitarian grounds under supervision.

This had led to a crisis between the two countries and Spain has called out to Europe for intervention in the matter. The Vice President of the EU Commission Margaritis Schinas indicated that Europe was not going to be intimidated by a migration issue. Morocco withdrew its envoy after an exchange with the Spanish Foreign Minister who shared her “disgust” about the incident.

Morocco justified its actions by blaming Spain’s decision for providing Brahim Ghali medical respite. However, this incident brought Europe into focus and a strong response was expected. After a rising diplomatic pressure, Morocco imposed control at the borders again and while many illegal immigrants were sent back, there were almost 1000 minors still residing in Spain. This raises concerns about their well being and protection from exploitation. This humanitarian crisis raised questions about the international responses in case of misunderstandings. Spain is yet to take a call about the way forward to take care of the minors in the country.