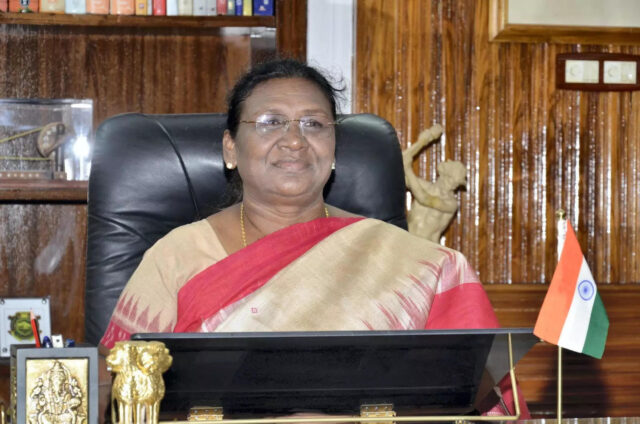 Droupadi Murmu was born on the 20th of June, 1958 in the Parbeda village and Kusumi block of the Mayurbhanj district in Odisha. She belongs to the Santhal tribe to which legendary freedom fighter, Birsa Munda also belonged.

Before entering into politics in 1997 with the BJP, Smt. Murmu was an assistant professor at the Shri Aurobindo Integral Education and Research Institute, Rairangpur and a junior assistant at the State Irrigation and Power Department, Government of Odisha.

During the coalition of BJP and BJD governments in Odisha, she was the Minister of State with Independent Charge for Commerce and Transportation from March 6, 2000, to August 6, 2002, and Fisheries and Animal Resources Development from August 6, 2002, to May 16, 2004. When the BJP came to power in Jharkhand in 2015, Murmu took oath as the Governor of Jharkhand, becoming the first woman Governor of Jharkhand.

The BJP nominated Smt. Droupadi Murmu as NDA’s candidate for the President of India in June 2022 ahead of the Presidential elections in India. On 21 July 2022, Murmu won by a comfortable majority in the 2022 Presidential election defeating the opposition candidate Shri Yashwant Sinha with 676,803 electoral votes (64.03% of the total) in 21 of the 28 states (including the union territory of Puducherry) to become the 15th President of India. She will take the oath of office in the Central Hall of Parliament by the CJI, Mr NV Ramana.

Droupadi Murmu is the first person belonging to a Scheduled Tribe (ST) community, the first person from Odisha and only the second woman after Pratibha Patil to be elected the President of India. Hailing from a small village in Odisha, Smt. Murmu has emerged from the marginalised sections of society in triumph and in the glory of democracy.

Prime Minister Modi appreciated her rich service and exemplary success and called her “a ray of hope for our citizens, especially the poor, marginalised and the downtrodden.” PM Modi tweeted:

“India scripts history. At a time when 1.3 billion Indians are marking Azadi Ka Amrit Mahotsav, a daughter of India hailing from a tribal community born in a remote part of eastern India has been elected our President! Congratulations to Smt. Droupadi Murmu Ji on this feat.”