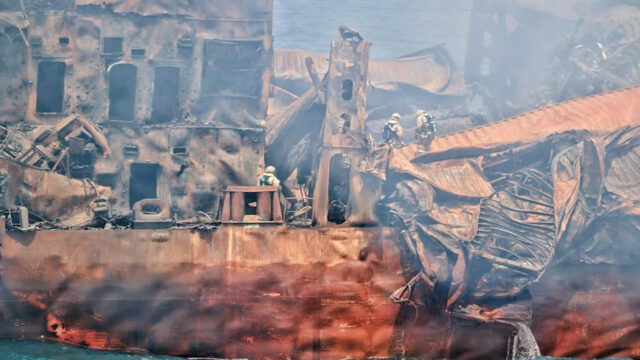 Nature has its own ways of displaying its power. As we hear different arguments about the need to focus on climate change, there have been several instances of accidents that have led to environmental crises. The accidental leakage of toxic waste from factories, the huge carbon foot prints and the unwanted side-effects of new technologies are just examples of a dis-balance between the speed of development and that of a control over it. The recent sinking of the chemical carrying ship off the coast of Sri Lanka shook the world and highlighted the huge potential of damage that the ecology would face in the coming weeks. The Singapore registered container X-Press Pearl was on fire for two weeks and has finally been put out by a team of Sri Lankan and Indian navies.

The cause of the fire is believed to be a leakage of nitric acid. BBC reported the owners of the ship stating that the crew was aware of the leak and was denied entry into the waters of India and Qatar. There has been an upheaval regarding Colombo’s decision to grant access and the government is investigating with due diligence. The burning of ship resulted in the beaches getting overflowed with debris. The Fisheries Ministry put emergency measures in place and fishing was suspended on the stretch from Panadura to Negombo. The Negombo beach is one of the popular tourist attractions and is now coated in oil.  The crew and the captain were rescued and are undergoing interrogations. The Black Box was recovered two days ago and will be handed over to the legal authorities to help in the investigation.

There is fear of a major oil spill as the attempts to sink the ship deep in the seas failed. As a result, the damage to the environment and the marine ecology is beyond imagination. The ship carried 25 tonnes of nitric acid. While most of the cargo was burnt, the remains are expected to carry traces which will be extremely harmful to the marine life.

This incident is a blow to the economy of Sri Lanka that is heavily dependent on fishing and tourism. However, the government is taking strict steps to ensure a proper inspection of the procedure carried out before the fire. India and Sri Lanka cooperated in reducing the damages to minimal however the weight and volume of the ship was beyond manageable. The damage to the ecology of the beautiful island country will take years to undo.

Interestingly, there have been many cases of accidents involving ships in the past and yet, a global mechanism is missing that can help in such situations. The Wakashio spill in Mauritius, Chevron Richmond Refinery oil spill, Emerald in the Mediterranean are just few of the instances when the massive oil spill impacted the ecology drastically. This then points to a few points that need consideration.

One, why is there a void in the domain of accidental environmental maritime damage in terms of an overarching international organisation? Secondly, the accountability in such scenarios becomes a major issue..For instance, China and Philippines have been pursuing the process of reaching a decision about claiming losses for an incident that took place in 2019. A Chinese vessel had accidentally brushed a Filipino boat however the fishermen are yet to receive their dues. Such scenarios make it even more important to put a checks and balances in places to facilitate resolution of similar disputes.

The countries altogether realise the relevance of measures to be taken to protect the ecology. There are efforts in place focussed on climate change, wild life protection, controlling carbon emissions, switching to environment friendly techniques and so on. Yet, a proper channel to address scenarios in which accidents can pose threat to all these is missing.

The Marine Environment Protection Authority in Sri Lanka warned of an acid rain expected due to the burning of the ship. The Sri Lankan Port Authority has taken all steps required to bring the damages to minimum. However, as the oil spills, the entire sea bed will be polluted. The plastic pellets from the debris of the ship has been overloading the beaches and continue to be a major challenge. Fishes and other marine animals can mistake them for food. India and Sri Lanka came together to deal with the crisis promptly. Perhaps a mechanism or agreement that enables countries in specific regions to swiftly respond to such situations in future will help cut down the losses majorly. In presence of a protocol, the efficacy of the steps taken will increase majorly.

As the big powers brace themselves for the United Nations Climate Change Conference to be held in Glasgow, this accident is bound to come up. The burning of the ship and the consequent pollution as well as the massive debris and spill in the sea is a realisation of the need to address such scenarios. While Sri Lanka responded swiftly to the crisis, an already existing system with a blue print to follow might have supported the efforts much more.

History of the Ceylon Tea