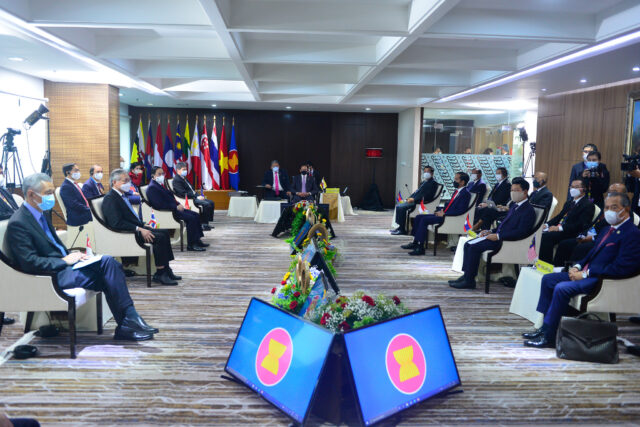 The ASEAN Leaders’ Meeting was held on 24 April 2021 at the ASEAN Secretariat in Jakarta, Republic of Indonesia, and was chaired by His Majesty Sultan Haji Hassanal Bolkiah Mu’izzaddin Waddaulah, Sultan and Yang Di-Pertuan of Brunei Darussalam. The Meeting was held with regards to addressing the building of ASEAN Community, hasten recovery from the COVID pandemic, strengthen ASEAN’s external relations and address pressing issues of common interest to all ASEAN Member States.

Since the military seized power and toppled the elected Government by Aung San Suu Kyi, the nation has been hold with wide protest and violence by the security forces. With the record published by Assistance Association for Political Prisoners (AAPP) on 26th April 2021, around 753 people have been killed and while 4484 have been arrested.

On the situation, all the leaders agreed and reached at consensus on the following

On 7th June, 2021 the Foreign Minister of ASEAN and China had their meeting in the South-Western city of Chongqing. The crisis of Myanmar was the highest on the agenda for the meeting. Disappointment was expressed for Myanmar for not following “Five Point Consensus”. Also, discussion about reopening of borders was done as a part of 30th Anniversary of ASEAN-China Dialogue relation was done. China was in fact appreciated for its cooperation and provision of essential medical supplies and vaccination across the region. Discussion about Vaccine Passport connecting China and ASEAN countries was also on the roll.
China has been regarding Quad as “an Asia Nato” and criticised its foundation. The recent steps by China, like holding this meeting in China has been regarded as a step to push back the Quad and what they regard as the “Military alliance”.
Conclusion:

Over the years, the role and working of ASEAN as a regional Organisation have been decreased. But this is not due to Indo-Pacific paradigm or the Quad but due to the few other developments. The biggest challenge has been China. With the on-going territorial disputes with Japan and India among many others, China’s refusal to abide the international law, naval ambition and the role in the Covid is to be taken into consideration and can’t be ignored.
ASEAN took time to establish its position on Indo-Pacific. Despite some differences the organisation did come to an agreement t. The latest challenge for them is the situation in Myanmar and with ASEAN policy of non-interference into the domestic matters puts them into a huge dilemma and difficulty to find a solution for the same.  Another issue is about the expansion, as the world is changing and so are the dynamics of bilateral relationship. The growth of interest for the members outside the south East Asia is something to be still looked upon. ASEAN still needs to find a way to come out of all these and not only maintain its hold and importance as a regional organisation but also grow its influence over the world politics.